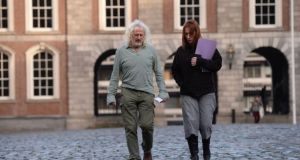 Independent TDs Mick Wallace and Clare Daly: “Increasingly what we deal with in the Irish parliament either comes from Europe directly or Europe is being used as an excuse why we can’t do things that benefit Irish people.” Photograph: Dara Mac Dónaill/The Irish Times

TDs Clare Daly and Mick Wallace will keep attending a variety of Oireachtas committees in Leinster House if they are elected to the European Parliament.

Ms Daly, who is standing in the Dublin European Parliament constituency, said she and Mr Wallace, a Wexford deputy, will aim to bring “Europe home in a timely way” to Irish voters on important issues.

The Dublin Fingal TD also told The Irish Times Inside Politics podcast they want to challenge the rise of the far right across Europe. The Independents 4 Change TDs declared on Monday that they will contest the European elections, with Mr Wallace running in Ireland South, on May 24th.

On her decision to stand, Ms Daly said: “It reminds me of the time I was a community activist taking on the local council and then made a decision that a lot of what I was campaigning about was coming from the council so I might as well challenge for that myself.

“It is a bit the same now as a parliamentarian. Increasingly what we deal with in the Irish parliament either comes from Europe directly or Europe is being used as an excuse why we can’t do things that benefit Irish people.

“It is a bit like taking the fight to the heart of the beast to see if we can make a difference. I think particularly now, at the present juncture, obviously Europe is in a crisis and with the dangerous rise of the far right and the potential break up in some ways of the European Union, I think it is a critical time and I think strong, critical but pro-European in a different sense voices are absolutely needed.”

Ms Daly, who was first elected to the Dáil in 2011, said Irish people need to be better informed of decisions taken at a European level much earlier than they are now.

She cited as an example the decision to join Pesco (Permanent Structured Co-Operation), an EU initiative for enhanced co-ordination on security and defence.

“I don’t think anybody has really gone to Europe with a view of really bringing Europe home in a timely fashion,” she said. “We get to deal with the crumbs after the decisions are made. That is not good enough. We see that in terms of the Pesco situation.

“What I mean is that the information for that should be in Ireland in a timely way. Now where do I mean in Ireland? For example, we have looked at the situation and in terms of European Union matters we are entitled to attend Oireachtas committees and all the rest.

“We would be fully intending to do that, if we elected, to go home and participate in those. The European Parliament comes with a lot of resources. Those resources should be used for information and to empower the people about what is going on in Europe in advance of the decisions actually being made.

MEPs have in the past attended the European Affairs Committee in the Oireachtas but Ms Daly said there is potential to attend more committees, such as those on justice and agriculture, although she said it would unlikely be a weekly occurrence.

“We will definitely explore that to the limit.”

Others have argued against such an idea, with Labour’s Alex White saying in recent days: “There is more than enough to do on committees in the European Parliament, and that’s where the work gets done.”

Frances Fitzgerald, the former tanaiste and minister for justice who resigned her posts in the midst of controversies about garda whistleblowers, is also standing in the Dublin constituency.

Ms Daly and Mr Wallace are prominent advocates for whistleblowers and wider garda reform but Ms Daly said Ms Fitzgerald was wrong to resign in November 2017.

She said other politicians - “Fianna Fáil and Alan Kelly” - entered the debate at the time.

“In terms of the sort of hype at the end around Frances Fitzgerald, we had no part in that whatsoever and actually didn’t call for her head at that stage.

“She was forced to stand down. I would say, as I said at the time, Fine Gael was responsible for that. It was Fine Gael members who panicked in the big media jamboree. They should have held their counsel. They should have stood by her. They were the ones who baulked in that media frenzy.”