Britain's Prince Charles and his wife Camilla have begun their tour of Ireland with a reception at Áras an Uachtaráin hosted by President and Sabina Higgins. Video: Bryan O'Brien 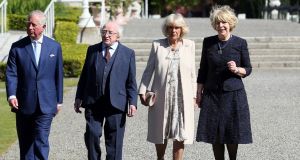 Britain doesn’t want to fall out with Ireland over Brexit. To this end a special delivery arrived in Áras an Uachtaráin from across the water.

There was a label attached. It read: “Please accept this Prince and Duchess as proof of our bona fides and tokens of our esteem.Your very good friend, Blighty.”

The Prince of Wales and the Duchess of Cornwall are as welcome here as the flowers in May. They know this as the couple has been to Ireland for three years in a row, each time in the fifth month of the year.

This was the prince’s third official visit to the Áras; the last one was back in 2002, and he first crossed the threshold in 1995.

According to a statement from Clarence House, Charles and Camilla’s trip would “showcase the strength and vitality of the connections between the United Kingdom and Ireland, and the friendship and partnership that has defined our relationship over recent years”.

So we should not be worrying our little heads over borders and customs posts and Common Travel Areas and tariffs and trade deals and beef boycotts.

Not that the “B” word was mentioned by any of the main cast during the visit to the Áras.

These formal events are so closely controlled that barely any words are spoken for general consumption as the VIPs fall into a strange language of appreciative murmurs, big smiles, whispered nothings and little hand movements.

It may have been mentioned in the “bi-lateral” between the two men in Michael D’s office, when they retired after the greeting ceremony to discuss weighty matters in private. The women took themselves off for a dander in the garden.

Their royal highnesses were received on the red carpet by Their Splendiferous Higginses, Michael D in his trademark Donegal tweed and Sabina very much a la mode in a lovely new shade known as “Macron” but also called French navy.

Charles wore a blue suit with a light blue silk tie, and Camilla wore a light beige, edge to edge coat over a floral dress. Disappointingly for lovers of pomp, the four couldn’t manage to scare up a hat between them.

The distinguished visitors signed the book in the State Reception Room. Because of his royal pedigree, the prince only signs his first name. Like Bono.

The visitors’ book was placed on the Queen’s Table, specially commissioned for the royal visit in 2011. It is a very small table and quite plain, so we are unable to report that Queen Elizabeth’s table had Queen Anne legs.

The air was heady with the fragrance of flowers – stunning arrangements of roses, freesia, lily of the valley, tall gladioli and big lollipop allium were placed around the room, bringing a little of the sun-drenched Áras gardens inside.

They posed for the cameras, then beetled for the back room, but not before Michael D, perhaps feeling the media might have been feeling a little shortchanged, pivoted on his heels to face them and executed an exquisite little bow.

Nobody knows what Michael D and Charles conversed about. It could have been anything because they both know everything. But it probably wasn’t Brexit.

Meanwhile, Sabina and Camilla motored across to the walled garden, past the Pope’s Tree which is well on its way to becoming a mighty oak since it was planted in 1979.

“It’s certified organic,” one of the President’s team told us.

So too is Prince Charles, one imagines. Not only that, but they press their own apples and pears. Another thing that the President and the prince have in common.

Which brings us to the elephant in the room.

It truly was a first to be actually in a room with an elephant. It’s called the Hyde Room, after the first President of Ireland and was opened just last year.

It’s a spiffing new space around the back of the main building, and it was where the President and Mrs Higgins brought their guests to meet a number of young people who are going great guns in the worlds of sport, art, music, science, agriculture and advocacy.

The room is dominated at one end by a huge painting of African animals – a brace of zebra and ditto of giraffes, a hippo, a baby elephant and an enormous elephant called Brexit. Or maybe not.

Before they got to the Hyde Room, the group stopped along the way at the Peace Bell. It was unveiled in 2008 to mark the 10th anniversary of the Belfast Agreement.

It was rung by two schoolchildren. Members of the National Youth Orchestra, who had been entertaining the young guests during their long wait, stopped playing, two waiters glided up to the double doors holding silver trays of drink and two youngsters holding flower posies also took up position.

Then a man with a very smooth, mid-Atlantic DJ type voice announced the big arrival. “Ladies and gentlemen, will you please give a big welcome to his excellency......”

After the showbizzy build-up, we half expected them to sashay on to the floor and perform the rhumba.

There were lady-in-waiting type ladies to take care of the posies once they had been sniffed, while one of them took possession of Sabina and Camilla’s clutch bags while they went around to meet the young people.

They included Haritha Olaganathan (14), from Adamstown Community College in Lucan, who has developed a method of producing eco-friendly, low-cost nylon from banana peel.

Her mother, Meena, looked on proudly and told us a number of companies have already approached her, but Haritha, wise young woman, is holding out.

Annie Madden and Kate Madden were there with their successful “FenuHealth” horse supplements. “Protect your horse from gastric ulcers” is one of their selling points.

Camilla perked up immediately, engaging the secondary school students from Meath in animated conversation. As she finally tore herself away, we’re nearly sure we heard one of the girls assure her that the product is available over the internet.

Then the musicians played some tunes. They were wonderful.

And Michael D smiled a smile which said “fintistic!”

Then the royals left for Farmleigh House up the road, where they were billeted for the night. Having freshened up after their long day, they returned to the Áras for dinner.

A spokesman would not give us details of the menu. “It’s a private dinner,” he declared. Maybe Michael D and Sabina were footing the bill for it. Unlikely, though.

But we know what gift they gave Charles and Camilla: a Climate Bell, made by artist Vivienne Roche.