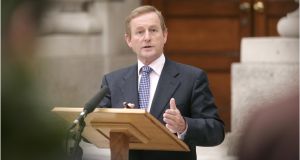 Former taoiseach Enda Kenny has warned that the holding of a “facile” Border poll on Irish unity would be “meaningless” if the intent was simply to reverse the historical situation in Northern Ireland.

During an online commemoration of the anniversary of the death of former SDLP deputy leader Seamus Mallon, Mr Kenny was asked about momentum building for a Border poll ahead of the possibility of Sinn Féin being in government in the Republic.

“That is not the sharing of a place and that is not showing the resilience and the work to be put in to understand everybody’s point of view as to how you should live in safety with freedom and respect and dignity.”

Mr Kenny said that after any such poll, a great deal of work would be required afterwards.

“I don’t accept, and I think the Government are very clear on this themselves, that simply having a Border poll for the sake of having a poll, or that you might think that there would be a slight majority in favour, merely brings about great difficulty for the unionist population of Northern Ireland,” he said.

A leading figure in Troubles-era Northern Ireland politics, Mr Mallon died last January at the age of 83. Deputy leader of the SDLP from 1979 to 2001, he went on to become deputy first minister of Northern Ireland after the Belfast Agreement.

Mr O’Connor described him as a humanitarian who got on well with everyone “and yet at the same time he was absolutely fearsome”.

“The crowning achievement of Seamus’s life was the Good Friday [Belfast] Agreement. It was something he was really proud of with David Trimble, his partner so much on that, and John Hume as well,” Mr O’Connor said.

“Bringing in others then who had been involved in armed struggle into that overall accommodation was always a tension,” he said.

“The tension was around what price do you pay in order to achieve that.”

Touching on the human, rather than the political, side, Orla Mallon recalled a father who had provided love and comfort during challenging times.

She told the story of visiting a playground in a Protestant area as a child only to find graffiti there saying “hang Mallon” and “hang the pope”.

“He comforted me and then he said, ‘Listen love, I’m in good company, don’t worry,’” she recalled of that incident.