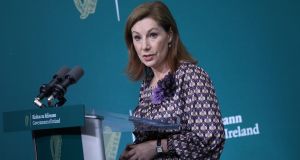 Josepha Madigan likened the very difficult circumstances facing children with additional needs and their families while their schools remain shut to the plight of vulnerable children in mother and baby homes. Photograph: Julien Behal Photography/PA Wire

After breakfasting impulsively on a mountain of Weetabix, fired-up Norma Foley steamed into her latest “engagement” with the “education partners” like a Kerry corner back on a revenge mission.

“Incredibly disingenuous” fumed the Minister for Education on morning radio, sliding in a crunching tackle on John Boyle, head of the Irish National Teachers’ Organisation (INTO).

Because it’s a sensitive situation, obviously.

“Hold me spinach!” cried Josepha Madigan, storming the airwaves to bag a slot on the very next show. In her haste, the Minister for Education (junior) tripped up and landed with her foot in her mouth. This was unfortunate as Josepha only recently extracted her tootsies from the same resting place after inadvertently causing offence last week with a clumsy word.

A couple of hours later she managed to hop into the Dáil to perform a second extraction through the medium of riddles.

Earlier, Norma appeared on Morning Ireland and promptly started a less than engaging row with an important section of her beloved Education Partners: the unions. A difference of opinion blew up between her and the INTO’s man, who said his organisation did not advise teachers not to return to classrooms if special needs schools were reopened.

We’ll see your Minister’s 'incredibly disingenuous' and raise you a 'grossly offensive', said the INTO

“Well, I think that’s incredibly disingenuous of Mr Boyle” huffed the Minister, who was interviewed straight after. “It’s a matter of deep regret that the unions did not accept public health advice.”

Then the Minister for State followed up on Today with Claire Byrne, backing up her senior colleague and also expressing her disappointment at the unions’ “unreasonable stance”.

But Josepha didn’t stop there. She likened the very difficult circumstances facing children with additional needs and their families while their schools remain shut to the plight of vulnerable children in mother and baby homes.

Because it’s a sensitive situation, requiring careful engagements from all the education partners.

But that’s the teachers for you – as bad as the worst of the bad nuns back in the day.

Their reps were outraged.

We’ll see your minister’s “incredibly disingenuous” and raise you a “grossly offensive”, said the INTO, demanding an immediate apology for “her insensitive comments this morning, comparing Special Education issues to mother and baby homes”.

The Opposition, doing its job, was outraged on the teachers’ behalf. This, after spending two hours on Wednesday morning outraged on behalf of student nurses and midwives. Sinn Féin tabled a motion calling for them to be fairly paid for their dangerous and demanding work.

Minister for Health Stephen Donnelly looked thoroughly cheesed off behind his emergency services mask as TDs queued up to lambast the Government for its shabby treatment of the students who are “on the frontline of the frontline”, as Holly Cairns of the Social Democrats put it.

There was no respite during Leaders’ Questions as anger over the nurses gave way to anger over the treatment of the teachers, two groups governments like to keep sweet.

All sides agreed that the best outcome is for the special needs schools to open as soon as possible, but that’s where the Taoiseach parted company with his counterparts who laid the blame for a third failed attempt at reopening squarely at the feet of his government and ministers Foley and Madigan.

“You scrambled at the last minute to put together a plan and it fell apart,” Mary Lou McDonald told him, citing a lack of preparation and consultation.

She said Norma Foley made “a big promise” about the schools but didn’t do the work to deliver it. Instead, when her latest attempt foundered on Tuesday night, she reacted by “finger-pointing and seeking to scapegoat special needs assistants.”

As for Josepha Madigan, her contribution to the fiasco was “not just crass and clueless, but a vain attempt to shift blame”.

Micheál Martin, yet again, was disappointed in Mary Lou. “Overly partisan and overly political” he sighed, not for the first time.

But no consultation? How could she stand up and say something like that? Micheál wondered, voice wistfully going up a Cork octave. The Taoiseach sounded hurt. “It’s so untrue.”

But he moved to smooth over the consternation caused by Foley’s fighting words on the radio. He stressed his belief that union leaders have been acting in good faith and were sincere when they said last week that schools would open. “Without apportioning blame to anybody” he understood how the recent alarming rise in Covid numbers sparked “real and genuine anxiety” among teachers.

“The whole journey up until now has been a shared one between the partners in education and that engagement will continue,” he soothingly signalled to the disgruntled múinteoirí.

A bit carried away

Arragh never mind Norma and Josepha. They just got a bit carried away.

Labour’s Aodhán Ó Ríordáin wasn’t cutting them any slack, saying the Taoiseach will now have to pick up the pieces after Foley and Madigan’s “deeply unhelpful” and “ill-tempered” commentary. They have lost control of the situation and it needs now to be “de-escalated”.

Norma is due for de-escalation on Thursday. Josepha Madigan sought to atone quickly after her latest verbal gaffe, slipping unexpectedly into the Dáil on Wednesday afternoon to correct the record and apologise on the double.

It was billed by the Ceann Comhairle as “a personal explanation to the House”. TDs can do this under Standing Order 65, it seems.

What Josepha said was completely baffling to anybody unaware of why she was coming in to apologise.

“I wish to correct the record of the House in relation to the context of a word I used last Thursday afternoon when speaking about students without special educational needs. The word was not appropriate and I did not use it intentionally and it was not what I meant to say. And while I publicly apologised last Thursday, I wish to restate it today on the floor of this House.”

The word she used was “normal”. The public apology at the time was on Twitter.

“And in that context, I also want to clarify that my earlier comments on media and referenced in this Chamber today, pertained to looking after our most vulnerable in our society which children with special educational needs are. I meant no more than that and at no stage would I compare these two very different situations.”

Her avoidance of the offending word “normal” was probably for the best. Students without special educational needs are not not normal either.

Explaining might have proved a challenge too far for foot-in-mouth specialist Josepha.