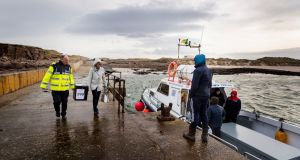 On Friday morning, the 8.30am ferry from Burtonport to Arranmore Island carried an important cargo.

Garda Margaret Byrne reversed the police car on to the ferry with care. On the back seat was ballot box number 161. It was destined for Arranmore National School, one of two polling stations where the island’s electorate of 513 had the opportunity to vote in the general election.

Voters on islands off the coasts of Donegal, Mayo and Galway cast their ballots a day ahead of the rest of the country. Some of the boxes were delivered by ferry, others by Air Corps helicopter or private boat.

The islands have their own arrangements; on Gola, off the coast of Gweedore in west Donegal, voting took place in the house of James Sweeney, while on Inishfree, near Dungloe, only four people were eligible to vote at a polling station open over lunchtime.

On Arranmore, the largest of the Donegal islands, Garda Margaret Byrne and the presiding officer Sandra Callaghan carry the ballot box into the classroom. Children’s books and toys have been tidied away to one side; a polling booth stands in the corner.

Based in nearby Dungloe, Garda Byrne has accompanied ballot boxes to Arranmore and Inishfree during previous elections. “I love this bit,” she says. “I’ve been out on the island loads of times, but on polling day you get to meet people you wouldn’t otherwise see.”

By 10am they are ready. The polls are open until 7.30pm, and a special ferry sailing has been laid on to bring the box back to the mainland immediately afterwards, ready for the count in Letterkenny on Sunday morning.

Possibly the youngest of the voters on Arranmore is Aileen Proctor, casting her ballot on her 18th birthday. She has been raised on the island but, like the majority of its young people, does not see a future here; she will leave in September to study in Letterkenny.

In his time, carpenter Finbar Gallagher sought work in Manchester; he returned to raise his family, and votes alongside his son, home from his job in London.

The problems are “emigration, not enough jobs . . . Something should have been done 30 years ago when the fishing industry was vibrant.”

Something that has been done recently is the introduction of high-speed broadband, the result of a partnership between the island’s community council and Three, and a digital workspace by the pier is under renovation.

On the island, opinion is mixed. Some say they have seen no practical benefit; Others say it has improved their connection with the outside world. The extensive advertising campaign brought new visitors to the island last summer, and encouraged others home.

Islander Denis O’Donnell says: “The speeds are that high, it’s like New York or London or Dublin. We have an ageing population – we need an injection of our youth again.”