Barristers cannot discriminate against clients on the basis of politics, Bar Council says 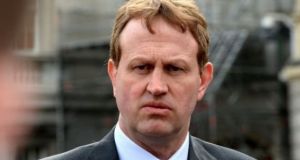 Barristers cannot discriminate against anyone on the basis of their politics, the Bar Council has said in response to a controversy about the Fianna Fáil spokesman on justice, Jim O’Callaghan.

The council, which represents most of the State’s barristers, issued a statement about members’ duties that did not refer to Mr O’Callaghan but which was prompted by statements about Mr O’Callaghan made by Fine Gael politicians.

Speaking on Clare FM, Taoiseach Leo Varadkar, said Mr O’Callaghan, who is a barrister, could have recused himself from representing former Sinn Féin leader, Gerry Adams.

The Irish Independent carried a report on Friday pointing out that Mr O’Callaghan represented Mr Adams in a case against the publishers of the Sunday World. The proceedings were issued in 2015 but have yet to come to court.

Mr Varadkar said Mr O’Callaghan, who was elected to the Dáil in 2016, could have recused himself from the proceedings.

On the Today with Sean O’Rourke programme on RTÉ, Minister for Employment Affairs and Social Protection, Regina Doherty, said the Bar Council’s code of conduct allowed barristers to “step away from a case” where there is a likelihood of a conflict of interest arising.

“Is it fair for Jim O’Callaghan to come out and lambast Sinn Féin for their policies or for their past political manoeuvres and still be able to take their coin by doing their work,” she said.

The Bar Council later released a statement in which it did not refer to the controversy directly or name any of the parties involved.

It said it was the duty of barristers to be independent and free from any influence, especially influences that might arise from their personal interests or external pressure.

“Barristers cannot discriminate in favour of or against any person availing, or seeking to avail, of the services of the barrister on the grounds of race, colour, sex, sexual orientation, language, politics, religion, nationality, national or social origin, national minority, birth or other status.”

It said these rules were detailed in its code of conduct, to which all members were bound.

“ It is in accordance with the provision that everyone is entitled to access to justice, which is central to trust in the Irish legal system and the rule of law.”

HSE says all 2m flu vaccines ordered will arrive on time 14:35
Covid-19: Taoiseach warns of restrictions in Ireland’s cities as hospital cases pass 100 13:57
Father speaks of ‘great courage’ of murdered daughter as man convicted 13:46
Minister says ‘rules apply to everyone’ after MP pictured on train without mask 13:16
Highly-disturbed teenager who has threatened to kill mother due for release 12:25

1 Covid-19: Taoiseach warns of restrictions in Ireland’s cities as hospital cases pass 100
2 Aer Lingus staff say they are living in ‘near poverty’ and unable to cover rent
3 People asked not to cross Border as Donegal prepares for Level 3 restrictions
4 How Finland kept Covid in check and protected its economy
5 North Korea regrets killing South Korean ‘to control coronavirus’
Real news has value SUBSCRIBE