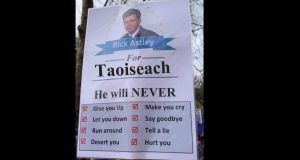 Rick Astley’s well worn campaign pledges may appeal to many of the electorate.

Politics is a strange business

Get off your big crikey sweet niblets Leo! Well, we don’t know what that means either but it formed a small part of a tirade against the Fine Gael leader from a random voter caught on video during a walkabout by Mary Lou McDonald.

The Sinn Féin leader will be relieved she is not the target for once and that the vent of fury was captured widely by reporters and swirling photographers and posted online.

Strange phrase aside, the 75 seconds of footage offer a succinct insight into voter frustration – the woman is articulate and on point: “he doesn’t care about anybody anymore”. Stop the cutbacks, she says; people with learning disabilities need money; how many homeless people are on the streets?

“Michael Collins would not be resting in his grave if he found out what you are doing.”

Meanwhile, on another corner of social media Sinn Féin posted details of its own opinion poll which puts it at 25 per cent against Fine Gael’s 17. If Collins is not restless, Varadkar surely is.

Blast from the past

Given that Sinn Féin’s Provo links appear too far lost in the mists of history for many to care about, Risk Astley is unlikely to capture the youth vote. Still, his well worn campaign pledges will bring many among the middle-aged electorate right back to 1987 and a political era of Charlie Haughey and Margaret Thatcher.

100km/h – The speed of wind gusts many voters will have to brave while on their way to vote on Saturday, according to Met Éireann weather warnings.

Pronounce Aodhán. Go on. It’s like “crayon” or “spray on”. Whatever you find to rhyme, Ireland’s best-known version – Labour Senator and general election candidate Aodhán Ó Ríordáin – has an ear for the poetry of online campaigning.

Unlike decidedly tone-deaf Fine Gael efforts, the former TD and junior minister has released a self-deprecating social media video that actually works. After numerous, and yes, humorous clips of people’s as Gaeilge grapples with his name, the 45-second Twitter video essentially boils down to the simple message that correct pronunciation doesn’t matter “as long as you vote for me on Saturday”.

And for anyone who’s interested, he was always plain old Aidan anyway, says his mother, until he “went to UCD and lost the run of yourself”.