Election 2020: Varadkar tells debate he is open to coalition with Fianna Fáil 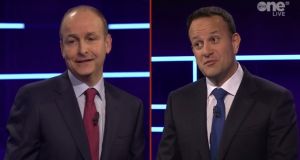 The first televised debate of the general election campaign between the leaders of the two biggest parties has taken place.

Fine Gael would be willing to go into government with Fianna Fáil or to support them in a confidence and supply arrangement in the next Dáil should that be the only way to form a stable government, Taoiseach Leo Varadkar has said.

Mr Varadkar was speaking during the first televised debate of the general election campaign between the leaders of the two biggest parties, which was aired on Virgin Media News on Wednesday.

Mr Varadkar and Fianna Fáil leader Micheál Martin, who are both vying to lead the next government and win the office of Taoiseach, sparred on various issues including health, housing, and crime.

Asked by moderator Pat Kenny whether they would be willing to team up in a “grand coalition” after the election, Mr Varadkar said the leaders “have to be grown-ups”.

“My preference would be to form a coalition with old partners like Labour and independents,” he said. “Maybe new partners like the Greens.

“But if it’s the case that people voted in a certain way, and the only way we could form a stable government is for Fianna Fail and Fine Gael to work together, well I’m willing to do that.”

Asked whether that would include supporting Fianna Fáil in a confidence and supply arrangement, he said he would be willing to do so.

Mr Martin, however, was less forthcoming on the issue, insisting that the country “needs a new government”.

“We’re prepared to go into government with other centre parties who share a common agenda and who really want to get things done,” he said, but accused Mr Varadkar of engaging in “personal attacks” on him and his party in recent months.

Both parties ruled out going into government with Sinn Féin. “I don’t think they are a normal political party,” said Mr Varadkar. “They opposed the setting up of a second special criminal court.”

Mr Martin described government with Sinn Féin as a “moral question” and said the party “continues to try and impose a narrative on the murderous campaign of the Provisional IRA – they try to justify it”.

When it was put to Mr Varadkar that homelessness campaigner Peter McVerry has suggested he has no empathy with people in crisis, he accepted the perception was an issue for him.

“I care deeply about our country and the problems that people face,” he said. “I show my empathy. Maybe I don’t say the right words but I show it in the work I do.”

Mr Varadkar also clarified that his reference to “people who get up early in the morning” refers to “anybody who works for a living”.

He said his party had helped these people by reducing USC and income tax, as well as introducing free GP care for children under six.

“But I absolutely acknowledge that we haven’t done enough and that’s why I want another term,” he added.

On housing, Mr Martin said the “fundamental point is that people can’t save to buy a house because of the cost of renting”.

Mr Varadkar countered that the issue with Fianna Fáil’s SSIA-style scheme to solve the issue was undermined by the fact that people can’t afford to save.

“I know we have not finished homelessness and that is something that I feel that we have let people down on,” he said.

On health, Mr Martin insisted there was “absolutely no comparison” between his tenure in the ministry and Mr Varadkar’s.

“Leo talks about free GP care. Four years ago, Leo promised free GP care for everybody under 18, and, guess what, it didn’t happen. They are using the GP system for electoral purposes.

“Leo, you promised us this five years ago. Have you any shame at all? The people are not fools.”

Mr Varadkar replied: “The deputy made plenty of promises in government he didn’t honour”, and said it was “easy to come here and say there are easy solutions to these problems, but there aren’t”.

“We’re both former ministers for health. One big difference is I accept that I have not got everything right in health and let people down. You’d swear that under Micheál Martin that everything worked. It is unbelievable arrogance.”

Mr Varadkar also expressed “deep regret” and apologised “to anyone who has to spend time on a trolley”.

“It’s not something that anybody wants and I know the impact it has on patients. I express my regret for that,” he added.

Both party leaders said they had private health insurance.

In relation to the pensions issue, Mr Varadkar said he had listened to people on the doorsteps: “We’ve got the solution, which is to pay a transition pension.” He also admitted it was “undignified” to expect retirees to draw the jobseeker’s allowance.

On the same question, Mr Martin said there was “an issue around sustainability of pensions into the future and we all have to acknowledge that”. He added there was “an unfairness there” in terms of how public and private sector workers are treated.

Recent political scandals around Dáil voting and expenses also featured. Mr Varadkar said: “Some people brought embarrassment on our party. None of them are candidates in this election.”

Mr Martin accused Mr Varadkar of “doing a deal” with – and “facilitating” – former Fine Gael TD Dara Murphy, who was embroiled in controversy over his Dáil attendance and expenses.

In relation to crime, Mr Varadkar said he was determined to get to grips with the feud in Drogheda, and said he had pledged additional resources to the Garda during a recent visit to the town.

“We need to put these people behind bars,” he said. “We need to take on the underlying factors such as poverty and deprivation.” Mr Martin described the issue as “an emerging crisis”.

On foreign affairs, Mr Varadkar emphasised the importance of continuity in relation to the Brexit talks, although Mr Martin pointed out that the State enjoys “an excellent diplomatic team”.

Also on Brexit, Mr Varadkar said the country was “as ready as it could be”, but added that if there is no trade deal struck with the UK, the State can “only be so ready”.

“If we cut Ireland off from its main trading partner, there will be consequences,” he said.

Both men also insisted they would continue in their roles as party leaders in the event they fail to win the election and form the next government.