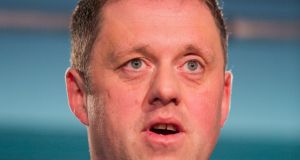 Fianna Fáil’s spokesman on education and skills will return to the Dáil for a third time after retaining his seat in the 2020 election.

He spent five years in the Seanad, elected to the cultural and educational panel, and served as Seanad spokesman on public expenditure and financial sector reform and later as health spokesman. He returned to the Dáil in 2016.

Living in Colpe, Co Meath, Byrne was educated at St Mary’s Diocesan School, Drogheda, and Trinity College Dublin, where he studied law and subsequently worked as a solicitor. He is also a qualified attorney at law in New York.

He is married to Ann Hunt and they have three children.

An articulate and combative speaker, he was a frequent commentator during meetings of the Oireachtas Education and Skills Committee.

He has campaigned against the shortage school places for children with disabilities and reduced timetables for vulnerable pupils.