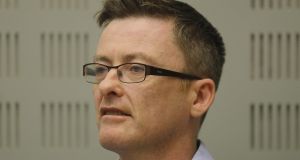 Fine Gael has failed to have a TD elected in Waterford in a general election for the first time after a surge of left-leaning transfers handed the fourth and final seat to Green Party newcomer Marc Ó Cathasaigh.

In the early hours of Monday, Mr Ó Cathasaigh joined Fianna Fáil’s Mary Butler and Independent Matt Shanahan in being elected to Dáil Éireann, with all three winning seats on the seventh and final count at Waterford IT.

Mr Ó Cathasaigh, a teacher from Tramore, began the day several hundred votes behind Fine Gael’s John Cummins and Damien Geoghegan, but a surge of transfers from People Before Profit’s Una Dunphy helped Cllr Ó Cathasaigh, who came to prominence along with many Green candidates in lasy year’s local elections.

“It’s mainly nervous exhaustion at this stage,” Mr Ó Cathasaigh said as he celebrated a surprise result for the Greens. “The processing of any finer options will happen later on. We have upwards of 25,000 doors canvassed, all day every day. We left nothing out on the pitch. It’ll take a while for it to sink in, but the vote today was left – and it stayed left – and that helped me.

“It’s been a very hectic last 12 months. It’s been a steep learning curve in the council – the county development plan is coming down the tracks and Green thinking is essential for forward planning. We have to put climate action and biodiversity front and centre.

“We may have tripled our mandate. The main story is the rise of Sinn Féin, but there’s also the rise of the Green Party vote. Last time out we narrowly broke 2 per cent nationally. This time out we comfortably broke 7 per cent.”

The seventh and last count saw Mr Ó Cathasaigh see off a late challenge from Mr Cummins, who picked up 2,597 transfers from Mr Geoghegan’s 5,549 votes.

It means Fine Gael has failed to win a seat in Waterford in a general election for the first time in party history, though there was a brief interregnum from December 1966 to June 1969 without a Fine Gael TD, due to the death of TD Teddy Lynch and a subsequent byelection win for Fianna Fáil.

West Waterford is also left without any TD, for the first time since the 1940s, as the combined Sinn Féin and Green wave unseated Fine Gael.