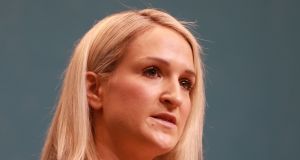 Helen McEntee’s Brexit work was commended by Donald Tusk, president of the European People’s Party, who called her an ‘exceptional diplomat’. Photograph Nick Bradshaw for The Irish Times

Helen McEntee (33) first won a Dáil seat in the 2013 byelection following the death of her father, Shane McEntee.

She has served as Minister of State for European Affairs since June 2017, with a particular focus on Brexit.

She led the Government’s response to a number of Brexit-related issues including ensuring businesses are prepared and correct customs are in place for when the UK formally leaves the EU.

Her work on this was commended by Donald Tusk, president of the European People’s Party, who called her an “exceptional diplomat”.

She is also a strong advocate for improved roads and telecommunications infrastructure for Meath and the north east of the country.

From Castletown, Co Meath, she graduated from DCU in 2007, having studied law, politics and economics. She worked briefly in a Citibank subsidiary.

She later completed a master’s in journalism and communications and worked with her father in Leinster House, first in opposition and then when he was appointed minister of state.