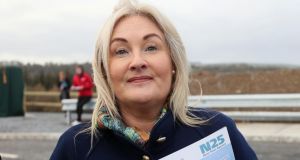 Independent candidate Verona Murphy has been elected in Wexford on the 11th count.

Fine Gael’s Minister of State Paul Kehoe and Fianna Fáil TD James Brown were also returned on the 11th count without reaching the quota, bringing the count to its conclusion.

Sinn Féin’s Johnny Mythen was elected on Sunday following the first count. He was followed by Labour leader Brendan Howlin on the eighth count on Monday morning.

Fianna Fáil TD Malcolm Byrne, who was elected for the first time in November’s by-election, failed to retain his seat.

Fine Gael’s Minister of State Michael D’Arcy was eliminated on the 10th count with his transfered votes bringing Mr Kehoe over the line in a battle with Mr Byrne.

Ms Murphy received the third most votes after transfers (11,849). She was deselected as a Fine Gael candidate last year following controversial comments about immigrants during Novembers by-election campaign. Ms Murphy missed out on a seat that time and ran as an Independent in the general election under the slogan of “vocal and local”.

She struck a conciliatory tone at the count centre on Monday, and thanked her family and team for their support.

“I’ve been here before and tasted defeat,” she said.

Mr Kehoe, who took the last seat, thanked his team and used his election speech to warn about the dangers of social media.

“We are elected, we will do our best for the country. But I really, really question the people who use social media in the way that they use it,” he said.

Mr Byrne, who narrowly missed out on retaining his seat, agreed, saying this general election has been “a dirty campaign”.

Other successful candidates commiserated with Mr Byrne. He said he is disappointed but intends to remain in public life.