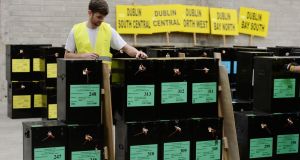 The deadline has passed for candidates to get on the ballot paper for the general election on February 8th. File photograph: Alan Betson

There are 516 candidates running for 159 seats in 39 constituencies in the general election with 160, or 31 per cent, being women.

There are about 113 Independent candidates running across the country, representing just over a fifth of all contenders in the February 8th election.

Fianna Fáil is running the largest number of candidates with 84 people seeking election to Dáil Éireann, followed by Fine Gael which is fielding 82 candidates.

The two main parties and the Green Party, which is fielding 39 candidates, are the only parties running candidates in every constituency.

Sinn Féin is running 42 candidates across 38 constituencies. The only constituency the party is not competing is in Cork North-West, home to Fine Gael Minister for Agriculture Michael Creed.

There are 160 seats in the next Dáil but Ceann Comhairle Seán Ó Fearghaíl is automatically returned, leaving 159 contested seats.

The figures on candidate numbers are based on nominations received by returning officers after the noon deadline on Thursday for the withdrawal of nominations.

Of all the parties, the Social Democrats has the highest proportion of female candidates with 11 out of 20 contenders – or 55 per cent of their representation.

They are followed by the Green Party with 23 of its 39 candidates – or 41 per cent – being women.

People Before Profit has the same proportion of  women candidates: 11 out of 27 (41 per cent).

Next is Aontú which has nine female candidates out of a total field of 26, a rate of 35 per cent.

They are followed closely by the Labour Party, which has 10 women out of its 31 candidates, a rate of just over 32 per cent.

Among the smaller parties, Renua Ireland - which has no TDs - is running 11 candidates: three women and eight men. The National Party has 10 candidates, six men and four women.

The constituency with the largest number of candidates is the five-seater constituency of Wicklow – home to Fine Gael Minister for Health Simon Harris – which has 20 candidates running.

The constituency with the fewest number of candidates is three-seater Cork North-West which has just nine people running.

Wexford and the newly reformed Laois-Offaly have the largest number of candidates from a single party with Fianna Fáil fielding four contenders in both of the five-seaters.

Kildare South stands out as the constituency with the highest proportion of women seeking a seat in the Dáil, with seven female candidates out of a field of 11.

The worst constituencies in terms of gender balance are Cork East and Donegal, which each have only one woman out of 13 candidates running.

The youngest candidates are believed to be Louis O’Hara, Sinn Féin’s contender in Galway East, and Tate Donnelly, the Green candidate in Cavan-Monaghan, who are both 21, the minimum age to contest a general election.

Among the oldest candidates are former Labour Kildare North TD Emmet Stagg who is 75, Fine Gael Kildare North TD Bernard Durkan who is 74 and former Fianna Fáil TD for Dublin South-West Charlie O’Connor who is 73.