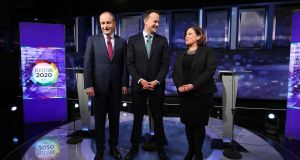 Fianna Fáil, Fine Gael and Sinn Féin are set for an extraordinary tie in their share of the vote in Saturday’s general election, according to the results of the Ipsos MRBI exit poll, with all three parties winning almost the same share of the vote.

The poll was taken today at 250 locations across the State, among 5,376 respondents who had just voted. It has a margin of error of 1.3 per cent.

If these figures are reproduced when the votes are counted on Sunday, it means that the outcome of the election will depend entirely on the parties’ ability to turn their share of the vote into Dáil seats - with Sinn Féin likely to struggle to match Fianna Fáil’s and Fine Gael’s return in seats. A hung Dáil is virtually certain.

While seat projections from these figures should be treated with a high degree of caution at this stage, the results suggest that Fianna Fáil will vie with Fine Gael to be the largest party in the next Dáil but also that both will have too few seats to anchor a majority coalition on their own.

The possible make-up of the next government will not become clear until the seats are filled and negotiations get under way between the parties. However, those negotiations are unlikely to be straightforward, with pre-election pledges on coalition making any government arrangement difficult.

Fianna Fáil leader Micheál Martin has ruled out coalition with either Fine Gael or Sinn Féin, while Fine Gael leader Leo Varadkar has said he will not enter government with Sinn Féin, but could be open to a deal with Fianna Fáil.

If replicated when the votes are counted, the results will be a spectacular breakthrough for Sinn Féin, which will achieve by far its best result ever in a general election.

However, the stated desire of the party to participate in the next government is unlikely to be realised unless Fine Gael or Fianna Fáil retreat from their pre-election positions of ruling out any such coalition.

The regional breakdowns of the figures show that Fianna Fáil faltered in Dublin, winning just 14 per cent according to the poll - a long way behind both Fine Gael (21 per cent) and Sinn Féin (22 per cent). The Greens are at 13 per cent, Labour at 8 per cent, the Social Democrats at 6 per cent, Solidarity at 7 per cent and independents/others at 8.5 per cent, the poll estimates.

The Sinn Féin vote was strongest among younger voters. Among 18-24 year olds, Fianna Fáil were at 14 per cent, Fine Gael 16 per cent, Sinn Féin 32 per cent and the Greens 14 per cent.

Saturday’s vote comes after a campaign in which a desire for change among voters became the central theme, with all opposition parties jostling for the mantle of change, and even Fine Gael, in government for nine years, promising change if re-elected.

The results of the poll have been announced simultaneously by The Irish Times and on RTÉ 1 television.

Exit polls carried out for The Irish Times by Ipsos MRBI have in the past predicted the election results with a high degree of accuracy.

Across this weekend, Irish Times reporters and commentators will provide you with comprehensive, up-to-the minute coverage of the election 2020 vote and count on irishtimes.com.

Our reporters will be at every count centre relaying the results as soon as they are announced and our rolling liveblogs over the weekend will make sure you don’t miss a thing.

Our political team will offer news, insight, analysis and opinion as the count unfolds on Sunday and Monday with stories on every constituency and analysis of who might form the next government.