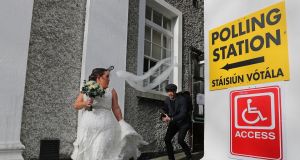 A gust of wind proves a challenge for bride-to-be Aisling Barron who was en-route to getting married at the Church of St Vincent de Paul on Griffith Avenue, Dublin. Photograph: Nick Bradshaw

High turnout has been reported in many parts of the country as voting continues to elect the 33rd Dáil.

Turnout was as high as 62 per cent in some areas by 5pm as voters cast their ballots on a Saturday for the first time in the history of the State. The day of the week, an Ireland rugby match and an approaching storm may all impact how many people are turning up to cast their ballots.

Voting will close at 10pm and counting will begin on Sunday morning at 9am.

Taoiseach Leo Varadkar claimed Saturday voting would help families and younger voters living or studying away from home, but others were sceptical as to its intended impact and question how it would upset the traditional rhythms of weekday voting.

It was anticipated that the Ireland vs Wales rugby match and GAA fixtures would also have an effect on what time people would go to their local polling station.

Add to that the arrival of Storm Ciara – with severe wind warnings in place along with rain - and a number of variables could be behind what appears to be a increase in voter turnout during the day.

In Co Wicklow, 62 per cent of the electorate had turned out to cast their ballots at one polling station by the coast at Greystones by 5pm, according to the Wicklow returning officer’s office. Arklow was at around 53 per cent.

In Manor Kilbride, in the west of the county, turnout was 52 per cent.

Overall in west Wicklow, figures generally ranged between 45 and 50 per cent.

In the east of the county, turnout was averaging around 54 per cent by the early evening.

In pictures: The dogs of Election 2020 VIEW NOW

In pictures: Ireland goes to the polls VIEW NOW

“Most polling stations are reporting turnout as being up on the last general election for that time of day,” said one official.

In parts of Dublin North, turnout by 5pm was almost 51 per cent.

More than 46 per cent of the electorate at a polling station at De La Salle school in Dublin Bay North had cast their votes ten hours after voting began.

There were stark variances between two polling stations in Dublin Central: At St Paul’s CBS in the north inner city, turnout was just over 28 per cent, compared to more than almost 55 per cent at Glasnevin National School.

There was a similar pattern earlier in the day in Dublin Bay South but the gap closed as the day went on.

Almost 46 per cent had cast their votes at Ringsend National School, with the same figure at Sandymount’s Scoil Mhuire.

In Mayo, turnout ranged between 32 (Ballinrobe) and 47 per cent (Ballina) by 4pm.

In Cork, turnout was up significantly on the last general election by 5pm

The county’s four constituencies recorded more than 45 per cent on average, compared to less than 33 per cent in 2016.

Evan O’Brien, of the Cork County Returning Office, said turnout “so far is very high in comparison to previous votes.”

“The Saturday election is seeing a different voting pattern with a very busy afternoon after a quiet morning,” he added.

“It remains to be seen whether voting this evening will see many more voters turn out. It is reported by polling staff that voters are becoming concerned about the weather and this may explain the strong afternoon turnout.”

The election campaign saw all parties claim they could meet a demand for change from the electorate. About 3.5 million people are eligible to vote at 6,500 polling stations in 39 constituencies.

The most recent opinion poll, the Irish Times/Ipsos MRBI poll, put Sinn Féin out in front, followed by Fianna Fáil and Fine Gael, although the gap between the three larger parties has been relatively small.

Polls opened at 7am and close at 10pm. The Irish Times will publish an exit poll as soon as voting ends at 10pm, giving the first indication of the outcome of General Election 2020. The results of the poll will be announced simultaneously at 10pm on irishtimes.com and on RTÉ One television. The poll, carried out by Ipsos MRBI, has been commissioned jointly by The Irish Times, RTÉ, TG4 and University College Dublin.

Voters will elect 159 members of the 33rd Dáil which will have 160 seats, two more than the 32nd Dáil, with Ceann Comhairle Seán Ó Fearghaíl automatically returned in Kildare South. The new Dáil is due to meet on Thursday, February 20th.

At the dissolution of the last Dáil, Fine Gael had 47 seats; Fianna Fáil had 45, excluding Mr Ó Fearghaíl; Sinn Féin had 22; Labour, seven; Solidarity-People Before Profit, six; Green Party, three; Social Democrats, two; Independents4Change, one; Aontú, one; and Independents and others, 22.

One seat was vacant due to the resignation of former Fine Gael Cork North Central TD, Dara Murphy.

There are 516 declared candidates and 160, or 31 per cent, are women. Marese Skehan, an independent candidate in Tipperary, died after nominations closed.

‘Community is heartbroken’ after five-year-old dies on Roscommon farm 14:47
Coronavirus: New Garda powers a response to ‘slippage’ on no-travel rule 14:44
Five more deaths from coronavirus in Northern Ireland 14:32
‘Humbled’ Andrew McGinley asks supporters to help others in their communities 14:26
Gardaí investigating what council officials knew of contractors’ payments to criminals 14:57