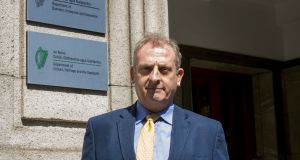 Isme chief executive Neil McDonnell: 'Cutting back on roads for rail would make sense, but the truth is we only have a couple of economically viable rail routes'. Photograph: Siobhán Taylor

The Green Party’s preferred policies, outlined in its election manifesto and its list of 17 demands for government formation talks, present opportunities and threats to parts of the economy.

Travel and construction are among the sectors potentially most affected. Proposed taxes on aviation fuel, for example, could hinder tourism, as 90 per cent of foreign visitors arrive in Ireland by air.

More carbon taxes could push up the cost of building raw materials, but a push for energy-efficient retrofitting is a clear opportunity.

Small businesses would have to negotiate the downstream implications of a range of Green proposals, such as a 7 per cent reduction in emissions, and the costs of more State income supports.

Four industry leaders explain below how the Green Party in government could affect their sectors.

Aviation is highly exposed to the Greens, who want to tax flying to fight climate change. Dublin-headquartered Avolon is among the largest aircraft lessors globally, with a fleet of 850 aircraft.

“The aviation industry has been working to reduce carbon emissions since before the Green Party existed,” says Slattery, who says manufacturers such as Rolls Royce and GE have been making engines more fuel-efficient for decades.

“Aviation’s share of global emissions is 2.5 per cent and has stayed the same for 20 years, even as the global fleet doubled,” he says.

Slattery is sceptical of further aviation taxes: “Taxing people has historically proven to be ineffective at promoting a course of action. I don’t think it will reduce the demand for travel.”

Any extra tax raised would therefore have no impact on emissions, he argues, unless “every euro” is ringfenced to pay for new trees.

Slattery believes the airlines should be incentivised to switch to newer, more fuel-efficient planes: “Lessors should come together and give each airline a green ratings score. The lower your score, the lower your finance costs.”

He says he would advise the Green Party to “stop picking on aviation and look at what has been going on in the industry for the last 40 years. Educate yourselves on how emissions occur and the sector’s roadmap for the next 10 years.”

“It wouldn’t hinder tourism at all. Everyone in adventure travel has an appreciation of the importance of the environment. The Greens in government? The higher up you have your advocates, the better,” he says.

Rankin says that while he is unaware how well many Green party members understand the tourism industry, its leader, Eamon Ryan “certainly does” because he founded a cycling tourism company, Irish Cycling Safaris.

“The current crisis has given us a once-in-a-lifetime opportunity to reinvent tourism, to take stock of how we do things,” says Rankin.

Ireland’s inescapable reliance as an island on air travel to bring in tourists means that it is “doubly important to reduce their impact” while they are here.

“Plastics, energy usage, your operating practices as a tourism business: there’s a lot more to it than just the product itself.”

He says the Greens are correct to favour promoting more long-stay tourists over short breaks, to minimise the proportional impact of their air travel. However, any extra taxes at the moment would “pose a challenge because the industry is teetering on the brink”.

Clarke runs the family business started by her now 86-year-old father, Michael Clarke, in 1961. He sold his Volkswagen Beetle car for seed capital. It doubles as a commercial building contractor and maintenance operator for big buildings.

“The green economy and construction go hand-in-hand. Construction is the industry that will deliver any new ‘green’ specifications,” she says.

Retrofitting of buildings – a Green policy mainstay – presents an enormous opportunity, especially for smaller contractors. Clarke says there are 100,000 homes that require retrofitting .

“This could be a huge boon for regional contractors who would have, if the programme is put in place, a decade of work in the pipeline.”

She says it is essential that any such scheme is sufficiently underpinned by public grants, tied to the selection of competent contractors, although all of this this would have to be funded from general taxation.

Increased carbon taxes would inevitably push up the costs – costs that can be pushed on to the end consumer – of building. Raw materials such as cement, a big emitter of carbon in its production, could go up in price, although this could also spur greater take-up of greener building, such as timber frame.

“Any rise in costs would be a concern. But the reality is that they would ultimately be passed on to whoever is paying the bill.”

Chief executive of the Irish Small and Medium Enterprise Association

He describes the Greens’ election manifesto, which outlines its main economic policies, as a “reasonably competent document; a bit of effort went into it”.

He is critical of a Green suggestion to reduce the tax relief on private pension contributions, in the absence of a concurrent drive to bring down the cost of public sector workers’ defined-benefit schemes.

“Everybody, public and private, should have to take the same pain.”

He says much of the Greens’ pension policies seem to be influenced by Social Justice Ireland, which “is not informed by basic mathematics at all”.

There is a “basic level of common sense” to the Greens’ desire to invest less in roads, says McDonnell, who previously lobbied for the Freight Transport Association before he joined Isme.

“Cutting back on roads for rail would make sense, but the truth is we only have a couple of economically viable rail routes due to low population density.”

He says the party’s promotion of building insulation is correct but it must show how it would pay for the policy. But its promotion of wind energy is just “virtue signalling” unless it also acknowledges that a grid powered by wind must have a back-up option, such as small-scale nuclear, for when the wind doesn’t blow.

He says no SME would “put its hand up to pay more carbon taxes”.

Asked if he believes the Greens understand the needs of small businesses, he says: “Eamon Ryan possibly does, but very few of the rest of them do.”