Coronavirus: State bodies and firms line up for bailouts 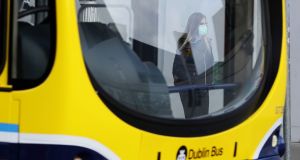 The CIÉ companies – Bus Éireann, Dublin Bus and Iarnród Éireann – are facing a cash crunch as fares have fallen by 90 per cent. Photograph: Brian Lawless/PA Wire

A range of public bodies and State companies are lining up to seek bailouts from the Government, with the final bill for this year estimated by officials to be in excess of €2 billion.

In addition, Government sources say the State may take stakes in strategically important private businesses, including Aer Lingus, to keep them operating.

The Government has already committed €250 million to local authorities to cover the non-payment of rates by businesses, but this is expected to rise to at least twice that sum by the end of the year, and possibly more.

The universities, citing a dramatic fall-off in the number of foreign students and a curtailment of commercial activities, are seeking some half a billion euro to deal with shortfalls in their budgets for this academic year and the next.

The CIÉ companies – Bus Éireann, Dublin Bus and Iarnród Éireann – are facing a cash crunch as fares have fallen by 90 per cent. The group is thought to be losing millions of euro every week, while the need to implement social distancing for the foreseeable future means it will need more buses and trains to carry fewer passengers.

The Dublin Airport Authority (DAA), which also has responsibility for Cork Airport, has seen passenger traffic fall by 99 per cent, and its retail operations are shut. The situation at Shannon Airport is thought to be just as bad, while a range of privately owned regional airports may also seek support. DAA declined to speculate on possible Government support, but it is already being discussed in Government circles. Staff at the company have already been put on a four-day week.

Several other State companies, including RTÉ, are believed to have approached the Government informally, or to be preparing an approach, in relation to financial support due to pressures brought about by the Covid-19 shutdown.

In addition, a number of the State’s cultural institutions, such as the Abbey Theatre and the National Concert Hall, have been hit by the closures and left with a budget shortfall. They are also likely to seek exchequer help, according to a person involved. According to one semi-State board member, “The State is the shareholder. They have to pay up.”