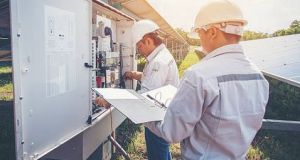 The Greens in Germany reached out to groups not usually associated with them – farmers, business owners – and listening to how they worked and how they were already working towards sustainability. Photograph: Getty Images

Picture the scene: Eamon Ryan, in white runners, strides into the Dáil chamber and, during a heated debate, announces to the Ceann Comhairle: “With respect, you’re an asshole.”

Hard to imagine for a Green Party leader? Long before he became Germany’s first Green foreign minister in 1998, casual dress and choice language were how Joschka Fischer and his allies broke into German politics – and cracked open the cosy post-war political consensus.

With Ireland’s century-old political consensus in flux, do the German Greens have any tips on taking power – and keeping it?

Around Europe parties with similar Green names are pushing similar main political platforms of sustainable living in the last-chance saloon for climate change. They face similar challenges to reach those goals, and require a skillset particular to Green parties: balancing power, pragmatism and principles. But the Irish and German Greens operate in very different political systems, and have very different origin stories.

The first 40 years of the Green Party in Germany were all high drama. From campaigns against nuclear energy and protests against US nuclear warheads on German soil to paintball attacks for backing Nato wars – it has been about war and peace, economics and economics.

Through it all, to mix metaphors, it’s been a bare-knuckle tug-of-war between the party’s two main camps: the pragmatist “realos” and the pacifist, hard-core fundamentalist “fundis”.

By comparison, Ireland’s Greens launched their first election campaign in 1982, still called the Ecology Party, with what Willy Clingan, once of this parish, called “the nicest and most endearingly honest press conference of the whole campaign”.

As the only reporter present he was given tea, sandwiches and cake, and a frank admission by the party chairman that they did not expect to have anyone elected. The moral of the story is: a Green Party is not always a green party.

As a federal country of 16 federal states, in addition to the government in Berlin, Germany effectively has 17 very different Green parties. Yet many of their stories offer interesting tales for Irish ears.

The southwest state of Baden-Wüttemberg (population 11 million), for instance, offers a masterful lesson in how to govern pragmatically as Greens without destroying a powerhouse economy.

After nearly a decade in power here, Green state premier Winfried Kretschmann has become a beloved patriarch who has never hidden his thick regional accent, and, at 71, has no aspirations of acquiring any big city taste for tofu.

With that he closed down a common line of attack against Greens as urban, elitist snobs. Instead Kretschmann set to work reframing the Greens governing the state from Stuttgart, the capital, as a pro-active, pragmatic and optimistic party. Not anti-car, for instance, but pro-mobility.

This balancing act was key for Green success here: Stuttgart is home to Daimler and the state’s many Mercedes drivers – themselves heads of world-class SMEs – know how much of their prosperity they owe to the internal combustion engine.

On Kretschmann’s watch Baden-Württemberg’s GDP has jumped 26 per cent to €511 billion in 2018 – a third higher than Ireland’s in the same year. Kretschmann and others did that by showing that Green politics and business are not a contradiction in terms.

Some steps taken to prove this point were hugely controversial among many Green rank-and-file, such as inviting car bosses to party conferences. In hindsight, though, many agree such invitations have opened important communication channels for the Greens on pressing questions of e-mobility and the future of German industry.

Kretschmann and his allies in Germany see Green politics in the 21st century less about top-down rules and more about nudging people to adopt more eco-friendly sustainable models in their own interest. That progressive Green Party model has now taken root elsewhere in the country.

This shift was already happening when the Fridays for Future movement became an amplifier for the Greens’ decade-old climate message. As a result, support nationwide for the Greens is now as high as 20 per cent. For a short time a year ago the party even overtook Angela Merkel’s Christian Democratic Union (CDU) as Germany’s most popular party.

Now the Green Party is battling for second place in polls with the Social Democratic Party (SPD), its one-time senior partner in Berlin’s federal government from 1998-2005.

Like many older Greens, Kretschmann has see highs and lows over the years, and urges his younger colleagues not to lose the run of themselves because of good poll numbers. “We have to stay grounded and remain on the carpet,” he likes to tell them, “even if, at the moment, it’s flying.”

That caution is shared by Lisa Paus, a Green Party Bundestag MP for Berlin. She has been in Ireland several times as a member of the parliament’s German-Irish committee, and is anxious not to be seen to be dispensing unsolicited advice.

At the same time, she says the choice facing the Irish Greens on government –and its bottom line for entering office with Fine Gael and Fianna Fáil – sounds very familiar. “I am convinced the Irish Greens shouldn’t give up the CO2 reduction goal, but to start a discussion with farmers and others about the ways to get there.”

Her party was hammered in the 2013 federal election by its rivals, who framed the Greens as the party of restrictions and bans wrapped up in defensive, protest politics offering few real answers.

The Greens picked themselves up and set to work on changing that. Though still more a party of higher earners in urban regions, they have secured their base in all generations and are the party of choice for first-time voters.

Paus said they did this by reaching out to groups not usually associated with the Greens – farmers, business owners – and listening to how they worked and how they were already working towards sustainability.

By going direct to people on the ground, she said, allowed the Greens to discuss with them what existing assistance was available – at national or EU level – to progress a climate transformation process all sides realised was necessary.

“We collected a lot of real, practical knowledge, much deeper knowledge than other parties, whose knowledge is often limited to ministry officials,” says Paus.

In recent elections, armed with this knowledge, the Greens fine-tuned their policy platform with concrete, real-world proposals they had discussed already with those most affected.

In this way they flipped the narrative by presenting both their goals – from transport to farming – as well as their proposals to get there.

“We said ‘our policy end-goals are fixed and here are our proposals to get there, but we’re happy to talk about the means. What do you have’?” says Paus.

“We turned the game around, and suddenly the others were the protest parties, opposed to everything, but with nothing to show themselves.”

With the other parties playing catch-up on pressing questions of economic transformation and climate, German Greens are optimistic the looming federal election in 2020 will be about who is most progressive, with real solutions to challenges.

A poll for Germany’s ARD public television found that 27 per cent of Germans think the Greens have the answer to the pressing questions of the future, compared with 12 and 2 per cent who trust the CDU and SPD respectively.

Numbers like that mean that Green leaders, though wary of opinion poll surges and disappointing election results, have a solid starting point in what appears to be a new political era.

For Green Party co-leader Robert Habeck this era marks a shift away from the old debates – high tax or low tax? left or right? – that have left the CDU and Social Democratic Party (SPD) “trapped in the 1980s”.

Green Party politicians across the country report signs of change in their constituencies. Even in rural areas people are showing up at their events and clinics that, in years gone by, would have viewed the Greens as the enemy.

And increasingly they see the Greens as a party interested in listening – and working with them – to secure life in rural Germany.

“The push for ever-more consumption held post-war society together,” says Rottmann, “but now people are asking: ‘is there a meaning to life beyond consumption’?”

These new partnerships are already bearing fruit – even pollen. In Bavaria the Greens – junior coalition partners in the state government – pushed a petition to protect the bee population, setting targets to reduce pesticides by increasing organic farmland to 20 per cent of the total by 2025, and 30 per cent five years later. The “save the bees” petition was hugely popular, so successful that it has become law.

“The art of governing is about managing the necessary, consequential shift while at the same time winning a societal majority for the shift,” he said. “That means winning over to Green future perspectives the growing number of firms, farmers and interest groups who are ready for change.”

Back in Berlin, Paus says such co-operations with farmers would have been unthinkable even a decade ago. And she sees no reason why the Greens cannot make the unthinkable thinkable back in power in Dublin.

“In Ireland I can imagine that for the conservative parties more sustainable politics seem so far away that some proposals seems overly ideological. The point is for Greens to change what people can imagine and adjust the daily reality of life for the better.”