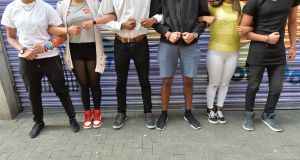 The focus of controversial political statements since the presidential election has not been Travellers, but immigrants. File photograph: Alan Betson/The Irish Times

After the presidential election in 2018, during which Peter Casey criticised Travellers to propel himself to a runner-up spot, TDs worried that a new avenue had been opened in political discourse.

It was feared that Casey’s actions, and his electoral haul of almost a quarter of first preference votes, would embolden some to voice opinions on Travellers and other minorities they may have previously kept to themselves.

The past year-and-a-half since that election – with Michael D Higgins saying “words matter, words hurt” on the night he was declared the winner – have proven that such fears were well founded.

The focus of controversial political statements since then has not been Travellers, but immigrants. Many TDs have spoken privately of detecting a rising anti-immigrant sentiment among some voters.

According to TDs from across the 32nd Dáil it surfaced when some constituents had concerns about public services, during protests by beef farmers last year and particularly in debates about direct provision centres.

Few have sought to seek political benefit from tapping into such sentiment. Even its political rivals credit Sinn Féin – 70 per cent of whose supporters were against allowing migrants from north Africa settle in Ireland, according to a 2015 poll – for its resolute stance against anti-immigrant views.

Independent TD for Galway West Noel Grealish in September claimed at a public meeting on a proposed Direct Provision Centre in Oughterard, Co Galway, that African migrants “sponge off the system”. In November, he asked Taoiseach Leo Varadkar in the Dáil if there were mechanisms in place to ensure that remittances leaving Ireland are fully accounted for and not the proceeds of crime or fraud.

He said he could understand transfers to other EU countries, but claimed the amounts sent to one non-EU country was “astronomical”.

The vast majority of TDs, including all the political parties, criticised Grealish strongly for his remarks. Although some, such as Mattie McGrath and Michael Collins of the rural Independent group, defended his right to raise such issues in the Dáil.

Friends of Grealish in the 32nd Dáil say he felt that his comments played well among many in his constituency. And it is widely expected that he will be returned at this general election.

During the Wexford byelection last November Fine Gael candidate Verona Murphy – who is standing in this election as an Independent – said, among other things, that terror group Islamic State is a “big part of the migrant population”. She was condemned across politics for her comments but still secured 24 per cent of first-preference votes.

What Casey – who is standing for election in Donegal – and Murphy have shown is that there is an appetite among a section of the electorate for candidates who attack minority groups.

Even though none of the parties will make immigration an issue in this campaign, there is a strong possibility that some Independent candidates will be elected and may then make it make it an issue in the 33rd Dáil.