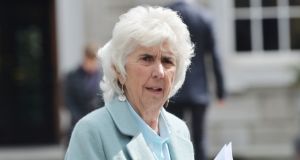 The Dublin Central TD Maureen O’Sullivan has announced that she will not stand for re-election, bringing to an end almost 40 years of representation of Dublin’s inner city by the independent organisation founded by the late Tony Gregory.

Mr Gregory was a TD for 27 years and Ms O’Sullivan was elected after his death in 2009. However, in a statement today Ms O’Sullivan announced she would not contest the forthcoming general election.

“It was a difficult decision to make especially after what’s been a very considerable and unprecedented legacy of almost 40 years of an Independent seat in Dublin Central,” she said.

In the last Dáil, Ms O’Sullivan worked as a member of the Independents 4 Change group.

“Being part of Independents 4 Change group has been very positive – we co-operated, collaborated, also disagreed and voted differently from each other sometimes – real independence. I wish them well,” she said.

“Everything I’ve said and done has been through a commitment to Social Justice, Equality and Fairness.”

Ms O’Sullivan’s retirement, along with the addition of an extra seat in Dublin Central to make it a four seater, opens the door to candidates challenging to win a seat.

While the Sinn Féin leader Mary Lou McDonald and the Minister for Finance Paschal Donohoe are expected to be re-elected, Fianna Fáil’s Mary Fitzpatrick, the Green Party’s Neasa Hourigan and the Social Democrats’ Gary Gannon will all push strongly to take a seat.

Labour’s Joe Costello, who previously held a seat in the constituency, is also likely to be in the running.