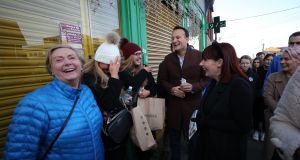 Frances Fitzgerald and Taoiseach Leo Varadkar out canvassing in Dundrum with Fine Gael colleague Josepha Madigan. Many in the party accept they have had a difficult first half of the campaign. Photograph: Nick Bradshaw

“I think people are concerned, alright. But there’s no panic.”

This was the summary of one senior Fine Gael source, speaking on condition of anonymity, when asked to describe the state of the party halfway through the general election campaign.

In Dún Laoghaire, the Taoiseach had fighting words on the canvass.

“At half time, we’re probably about three points down but politics is hurling, not soccer, and we’re going to pull this one back,” he said.

There is general acceptance across the party that Fine Gael has had a difficult first half of the campaign. For all the “warm reception on the doors” guff, party sources at all levels of the organisation concede that their efforts to get voters to see the glass as half full rather than half empty have stuttered badly.

The Fine Gael messages on Brexit and the economy have fallen flat, and the party’s candidates on the doorstep and its spokespeople in the media have been badly roughed up about housing and health.

The published opinion polls depict the outline of the party’s discomfort. Last week, the first Irish Times/Ipsos MRBI opinion poll of the campaign showed Fianna Fáil marginally ahead, Fine Gael slumping in recent months and strong gains for Sinn Féin. On Sunday, two further polls published in newspapers showed a basically similar picture. And sources familiar with the party’s own polls do not say that they paint a different picture.

All sides accept that this is where the campaign is now. The question is: where is it going?

For Fine Gael, that question is can it drive voter attention to the economy while simultaneously planting doubts with voters about the change offered by, in their different guises, Fianna Fáil and Sinn Féin?

Some party sources say that a difficult first phase of the campaign was not unexpected. It is true that long before the campaign began, ministers and other senior figures were talking privately about being behind in the first half and then strengthening as polling day grew closer, and voters focused more on what they wanted from the next government.

They’re right that a party which has been in office for two terms can hardly expect an easy ride to a third term. They take solace from the observation throughout the country that there is little of the anger which so shocked canvassers in 2016. Fine Gael will, they say, continue to hammer home its message on the economy in the belief that voters will eventually – however grudgingly – give the party credit for growing incomes and job creation.

This “inevitable comeback” expectation, however, is the rosy scenario. There’s a less benign one, similar to what happened in 2016. In that scenario, the party has a bad first half of the campaign – and then things get worse. And really, there is little tangible sign yet that things will be different this time.

Canvassing on Sunday in Dundrum in south Co Dublin in the constituency of Dublin Rathdown, where Fine Gael hopes to add a second seat (most likely taking that of sitting independent and transport minister Shane Ross) the reaction to Taoiseach Leo Varadkar was overwhelmingly positive.

“Omigod, he’s so cool,” trilled teenage girls coming out of the Dundrum shopping centre. If selfies were votes, Fine Gael would already have the second seat sewn up here. But this is friendly territory for Varadkar. Most of his battles will be less on hospitable terrain. If he is going to turn this around for his party and deliver an historic third term, he will have to win them, too.

Watching, one experienced hand said that unless the campaign changes in Fine Gael’s favour in the coming days, the party’s “second candidates” – those running to win or keep second seats – would start to get jumpy. If it gets to that stage, people would start to panic. And they’d be right.