Taoiseach should have been informed by Minister of Health, Dáil told 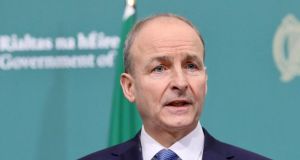 Taoiseach Micheál Martin only found out when he was texted an Irish Times story that the contact tracing system was so overwhelmed at the weekend that people who tested positive were being asked to do their own contact tracing.

The Irish Times disclosed on Tuesday night that thousands of close contacts of positive Covid-19 cases from over a three-day period will not be contacted by the HSE because the contact tracing system was overwhelmed by cases last weekend.

The HSE has said it will send a text message today to between 2,000 and 2,500 people, who have already been informed by text of their infection, asking them to tell their close contacts to contact their GPs immediately to seek a Covid-19 test.

Mr Martin told Opposition leaders that “I’m not happy, and I’m disappointed with the fact that because of the extraordinary demand” the system was overwhelmed.

But the Taoiseach insisted there was not a tracing system that will not come under enormous pressure because of the level of testing, and he said they were at 120,000 weekly capacity for testing.

Social Democrats TD Catherine Murphy said it’s “not good enough” that people were being asked to do “DIY contact tracing”, and said she was shocked Mr Martin found out by text. He should have been totally informed and kept up to date by the Minister for Health, Ms Murphy said.

Labour leader Alan Kelly said it was “bonkers” and “absolutely ridiculous” that 2,500 people were being asked to contact trace when they could be in hospital or in intensive care when asking them to trace their own contacts. He said the army should have been called in.

Sinn Féin leader Mary Lou McDonald said “we need to come out of this six weeks lockdown with a state-of-the-art, gold-standard testing-and-tracing system” with 24 hours turnaround universally for testing and a similar 24-hour turnaround for tracing.

She said the matter was raised endlessly but the system became so swamped at the weekend that it collapsed.

Mr Martin faced Opposition leaders’ ire at the revelation and criticism of the Government’s handling of the situation.

The HSE had reconfigured the system and expected to contact trace 1,500 people a day, he said.

Recruitment was ongoing for contact tracers with 400 employed and an additional 220 by the end of next week, with an additional 60 to 70 new staff every week ending with close to 1,000 recruits, according to Mr Martin.

He said “it took an awful lot of journalistic action” to find out that it takes over four days to trace close contacts of infected persons.

Mr Kelly said the HSE had a huge amount to do and suggested the testing and contact tracing process should be separated out and taken over by another regulatory authority.

Mr Kelly also questioned the recruitment process for contact tracing and said there were thousands of eligible people including retired civil servants who could be employed.

But the Taoiseach said “it’s a bit late in the day” to be considering another regulatory authority. He said the system was in place and was being reconfigured and 1,500 people would be contacted daily.

Ms Murphy said the issue was “not a minor matter” and that if every person had a modest five contacts that would be over 10,000 people unaware that they had tested positive.

Mr Martin said there was “no secret” being kept on the issue, with every person being informed about contact tracing by text.

Ms McDonald said it was “hard to believe that nearly eight months into a pandemic and your Government has failed to get this right”.

She said it had been raised endlessly with the Government and the system was so overwhelmed at the weekend that it “completely broke down and was swamped”.

The Sinn Féin leader said there were plenty of warnings as a public health doctor had warned the regional tracing system was as close to collapse as at any time in the pandemic.

The Dublin Central TD said it was “extremely alarming” that the system collapsed on the eve of a lockdown.

Mr Martin said control of the virus was down to human behaviour and that other testing technologies should be considered. He hoped that by the end of this lockdown they could supplement existing technology with additional methods.