‘That could have been seven coffins’: city workers on alert after courthouse car bomb 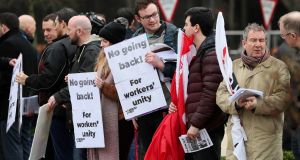 In the past week in Derry there has been much talk of the future, but also of the past.

The explosion of a car bomb outside the city’s courthouse last Saturday evening prompted the inevitable comparisons to the “dark days” of the Troubles. The hijacking of four vans – belonging to workers delivering pizza, supermarket groceries, the post and carrying out housing repairs – were similarly reminiscent of that past.

Last Saturday’s bomb was placed inside a hijacked pizza delivery vehicle and then driven to the courthouse; in the other incidents, on Monday, vans were hijacked by armed, masked men who ordered the drivers to take them to specific points in the city, causing security alerts, evacuations and traffic disruption.

Five men aged between 21 and 50 were arrested in Derry earlier in the week, but were released without charge.

Delivery drivers are “an easy target”, says Paul McShane, the owner of Paolo’s Pizzas. “They can phone for a delivery, but it’s not a pizza they’re waiting for.”

He has lost seven vans to hijacking and arson, most recently in 2015. While the vehicle hijacked on Saturday was not one of his, his drivers have been nervous since.

“We tried to keep a service going as normally as possible, but always in the back of your head you’re afraid of being stopped,” he says.

“We always say to our drivers, ‘if you see anything that makes you nervous, or you think you don’t want to go into an area, we won’t force you’.”

A number of services were temporarily suspended in parts of the city following the hijackings, including Royal Mail deliveries, some supermarket deliveries, and Housing Executive repairs.

I feel for anybody who’s out working, trying to make a living, and this happens to them. It’s not right

The union, whose members include courthouse employees, held a rally in Derry city centre yesterday, supported by the Irish Congress of Trade Unions, under the slogan “No going back: No to paramilitarism, sectarianism and repression.”

“On Saturday you had a worker heading out to do a day’s work and he gets to a house and there’s a bomb put in the back of his van,” says Ó Sándair.

“Of course that’s going to increase fear. Before you had elaborate hoaxes, but this time – well, everyone’s seen the footage of the young people walking past just before the bomb exploded. That could have been seven coffins.”

He cites friends who do courier deliveries for companies such as Amazon. “They don’t know if they’re heading into an area whether somebody might take the notion to hijack them.”

Many have similar concerns, but are unwilling to be identified for fear they might be targeted.

“I’ve been reluctant to work at night since,” says one taxi driver. “You can’t help but feel a bit threatened. My car’s my livelihood.”

“I’m a builder, I have all my tools in the back of my van,” says another. “What if that gets hijacked and then blown up in a controlled explosion? I’ve lost everything.”

“I feel for anybody who’s out working, trying to make a living, and this happens to them,” says McShane. “It’s not right.”

“These are people earning their livelihood and they get hijacked. I’d like to think those days had passed.”

Ó Sándair agrees. “The message is that there’s no going back to what we had in the past.”