Martin calls for Oireachtas inquiry into cost of children’s hospital 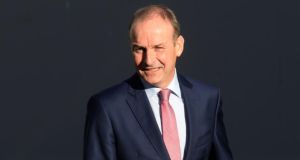 Micheál Martin has renewed his call for a full inquiry by an Oireachtas committee into the trebling of costs for the national children’s hospital.

The Fianna Fáil leader said an inquiry by accountants would only “lock” debate on the issue for another two months, but a parliamentary inquiry would require witnesses to attend and answer questions. This would be the best way to deal with this, he believed.

Taoiseach Leo Varadkar said accountancy firm PWC had this week started its review of the costs for the Department of Health and terms of reference were being agreed. A report is expected in a few months.

He said that cost was estimated at €650 million in 2016 when Taoiseach Leo Varadkar was minister for health, but the following year it had risen to €980 million and by the end of 2018 it was €1.7 billion.

Mr Martin said that a children’s hospital in Stockholm, an “outlier” for its cost of €2 billion, provided 1,340 beds but the Irish hospital would have no more beds above the 473 planned.

“Not an additional bed will be provided despite that extraordinary cost increase,” he said as he asked when the Taoiseach was informed of the cost increases, when the Department of Health knew in August last year.

Mr Varadkar said the hospital would serve children and the community for the next generation, defending the bed numbers and said every bed would be in a single bedroom.

Cost overruns could not be attributed to a single issue but included construction inflation, health and safety requirements, which meant a “very much more expensive” sprinkler system and a “miscalculation” around the costs of electricity and cabling.

He said there were two satellite services in Tallaght hospital and Connolly hospital in Blanchardstown to consider, along with VAT and the costs involved in making the hospital fully digital for the 21st century.

He was informed of increased costs at the end of November and sought full details, which were only provided to him a day or two before the last Cabinet meeting before Christmas.

But the Taoiseach stressed that “this project will be an enormous asset – one that will serve our children not only for decades but for the next century”.