Cross-party group of politicians calls for No vote in referendum 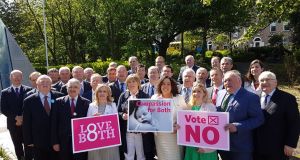 A group of TDs and Senators opposed to repeal of the Eighth Amendment gathered in Merrion Square in Dublin. Photograph: Sarah Bardon

A cross-party group of TDs and Senators has joined together calling for a No vote in the referendum on the Eighth Amendment.

Two Ministers of State - John Paul Phelan and Ciaran Cannon - were in attendance, as were three Fine Gael Senators.

Mr Tóibín and his party colleague Carol Nolan, who has been suspended from Sinn Féin for voting against policy on the abortion issue, were the only representatives from the party present.

The group is calling for a No vote in the forthcoming referendum to remove Article 40.3.3 of the Constitution and allow for the regulation of the termination of pregnancy.

The Government has proposed legislating for access to terminations up to 12 weeks. Beyond that, abortions will only be permitted when there is a risk to a woman’s life or health.

In the cases of fatal foetal abnormalities, terminations will be provided without gestational limits.

Fine Gael and Fianna Fáil have free votes on the issue and members are entitled to vote in accordance with their conscience.

Members of the Oireachtas seeking a Yes vote in the referendum have previously held a similar photocall.