‘My circumstances were the same as Savita Halappanavar’s’

I had symptoms of septicaemia but was refused care, as my baby still had a heartbeat 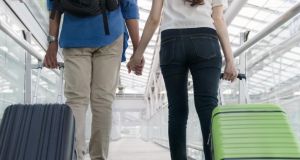 ‘I wondered if the airline staff would stop us at the boarding gate, but they let us through’

In the run-up to the referendum on whether to retain or repeal the Eighth Amendment to the Constitution, on May 25th, The Irish Times has asked readers to share their personal experiences of abortion, which the amendment bans in almost all circumstances. This is one of the accounts we received.

In January 2014 my husband and I sat waiting in the departure lounge to board our flight to Liverpool at 7am. I was extremely unwell; I had pains going down the entire left side of my body and across my stomach.

I was almost 20 weeks pregnant, and my waters, which had broken seven weeks earlier, had changed from running clear to pink in the past few days. I was getting symptoms of septicaemia. I had been refused care by my hospital because my baby still had a heartbeat, even though it had no chance of survival.

The hospital was not going to help me. We had no choice but to keep going. My husband put his arm around my waist and helped me on to the plane

My circumstances were the same as those of Savita Halappanavar, the young woman who had died at University Hospital Galway in 2012, and a new law, the Protection of Life During Pregnancy Act 2013, had been in force for nine days.

I wondered if the airline staff would stop us at the boarding gate, but they let us through. As we went down the stairwell to get on the plane my head went into a spin. I had to sit down on the stairs, as I almost passed out. My husband said to me, “Will I ask them to get an ambulance, and we can go back to the hospital?” But I knew there was no point. The hospital was not going to help me. We had no choice but to keep going. My husband put his arm around my waist and helped me on to the plane.

When the plane took off, and turbulence kicked in, I thought I was going to die. I became so dizzy, and my whole body was shaking with cold, but at the same time I was sweating heavily. My husband got me some water, and the flight attendant looked at me in horror. It was only a short flight, but I was in agony the whole journey.

We arrived at Liverpool Women’s Hospital for our appointment at 11am. I had in the back of my mind a worry that the British doctors might send me home, realising an awful mistake had been made.

My Irish consultant didn’t seem to fully understand what was wrong with me and my baby. For the previous three weeks what she told me changed each time I saw her. I was first told I was likely to miscarry in the next week. Then I was told the baby would probably have severe brain damage and be physically disabled. The third week I was told the baby would die at birth, as it didn’t have any lungs, and my life was in danger.

I was one of the first cases under the new law, and my hospital didn’t want to be the first to do a termination. They helped us make the arrangements to travel to Liverpool, and advised us that it was the best thing to do.

I was a complete mess. I had spent the previous three weeks crying every day. I hardly ate or slept. I could hardly think straight, as I was mentally exhausted. I couldn’t believe this could be happening to me. I didn’t want an abortion. I wanted my baby to be okay.

I had spent the previous three weeks going in and out of hospital every few days to see my consultant and to get my bloods checked, and going back in to see if the baby still had a heartbeat. I was told that once the heartbeat had gone they would be able to induce the labour. I couldn’t feel any movement, but there was always a strong heartbeat. I was the live support system for my baby, but when the umbilical cord was cut my baby would die.

Being conscious for the delivery of your baby, knowing that this baby was either going to be born dead or die in your arms, is beyond horrific

We were called into a room to be examined by our British consultant, who we had never met before. He put the jelly on my stomach for the scan. He was pretty angry when he examined me. He turned and said, “Your waters are completely gone. How have the Irish sent you over to us in this state?”

We met with a nurse who talked us through the procedure and the paperwork. I asked to be put asleep. I couldn’t cope with having to deliver my baby naturally. The thought of having to be conscious for the delivery terrified me. I was told that, no, they couldn’t do that in this hospital.

I was taken up to the delivery room with my husband. We spent most of the time alone. The nurse came in and out to give me medication and check my temperature. I was there a few hours, and suddenly I got really cold. My husband put a few extra blankets over me, but my body started shaking. I told my husband to ring the bell, as I thought I was going into septic shock.

My consultant was urgently called, and she gave me medication to treat septicaemia. I was 36 hours in labour. It was extremely painful, and the most terrifying experience I’ll ever go through. Being conscious for the delivery of your baby, knowing that this baby was either going to be born dead or die in your arms, is beyond horrific.

I spent months and months after I returned from Liverpool trying to piece my life back together. I was severely traumatised and was in a constant state of panic. There was a time when I thought I would never get back to feeling normal again.

Every week Irish women travel to Liverpool, exported because Irish hospitals are prohibited by law from looking after them. Please vote Yes to remove the Eighth Amendment and stop our pain.

The identity of the author is known to The Irish Times, and a copy of the woman's medical report has been seen.