Finn McRedmond: Overpromising makes practical sense when it comes to the vaccine

The United Kingdom has started the rollout of the Oxford University/AstraZeneca Covid-19 vaccine, with 82-year-old dialysis patient Brian Pinker the first in the world to receive the shot. Video: Reuters 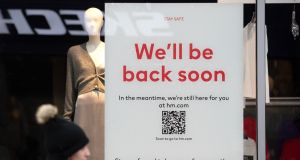 Exiting with haste: By overpromising, Boris Johnson pressurises the system, and redoubles the motivation to administer as many vaccines as feasible. Photograph: Andrew Matthews/ PA Wire

Imagine you have two optimistic children. One eagerly waits to receive presents, unsure of how or why they might arrive. Another wants a treehouse, so gathers wood and nails and parental guidance on the logistics of treehouse building. Within weeks the latter has a treehouse, and the former has not received the presents he so desperately desires.

The distinction, employed by economist Paul Romer, is between complacent optimists and conditional ones. And the difference might go a long way in helping us understand the psychological processes of navigating the pandemic.

It seems hard to make any case for optimism in the midst of this crisis – especially its most irresponsible variant. The complacent strain is responsible for reams of damaging lockdown-sceptic, anti-mask arguments: Covid-19 is no worse than regular flu; everything will be fine by Christmas; herd immunity will sort us out in no time; our health services have coped in the past, why wouldn’t they now?

This dangerous complacency – that everything will ultimately be okay, despite a few bumps in the road – is in no small part responsible for the dire situation we have found ourselves in over the past 10 months. With staggering case rates, ICUs reaching capacity, and death tolls tragically ticking up, it is right to leverage severe criticism at those who peddle baseless justifications for inaction. In short, the complacent optimists wait for the crisis to resolve itself, unsure of how or why that may happen.

In the early stages of the pandemic, we saw it from Boris Johnson, whose strategy stood in marked contrast to many European counterparts. Large-scale organisations continued as the World Health Organisation declared a pandemic; and Johnson seemed swept up in the belief he could somehow outmanoeuvre the virus, still buoyed by his electoral victory and Brexit triumph. The inevitable lockdown arriving several weeks too late naturally threw cold water on that attitude.

And so too have we been treated to similar complacency from Donald Trump. Johnson may possess seemingly boundless self-confidence, but Trump occupies a different realm altogether. In late September the president was touring the country, hosting packed rallies, claiming the pandemic was waning, all while conveniently ignoring the death toll had reached 200,000 Americans. His public evaluation of the pandemic has always been peachy and optimistic, his policy appropriately complacent.

But just because Johnson (early on) and Trump (the whole way through) demonstrated staggeringly complacent and irresponsible optimism, it does not mean optimism has no place at all in the fight against the virus. In fact, conditional optimism – the child who builds the treehouse – is critical to plotting the course out of the crisis. And that requires designing an exit strategy underpinned by the belief that the sunlit uplands of a world no longer gripped by Covid-19 is no fantasy.

It requires a different approach. There is a natural and understandable tendency to become fatalistic while things are at a nadir. What is the point in taking all of these burdensome precautions when the situation is so grave that the light at the end of the tunnel is barely perceptible? Things do not look good now and we are awaiting a deterioration over January before we are met with any kind of improvement. Why continue to try?

But this is exactly the importance of optimism: it reminds us that progress does not just happen, but is a direct result of action; and it encourages us to continue to try by allowing us to hold on to the belief that the situation can improve.

The conditional optimist might say that with appropriate lockdown measures, mask wearing and social distancing, things will not just be tangibly better in due course, but we know exactly how to get there. If we cannot believe things will improve, failure to move forward seems the only guarantee.

Despite Johnson’s early missteps, his signature buccaneering confidence –absent for the best part of nine months – might be exactly the requirement of the moment as we face the vaccine roll-out. The most tedious critique of the UK prime minister rests on his inclination to overpromise and underdeliver: once again he has made a promise he cannot keep; his optimism is unfettered.

That criticism may hold in lower stake scenarios. But with the advent of the vaccine, it is exactly this tendency towards unfettered optimism that will see Britain exit the pandemic with haste. By overpromising, Johnson pressurises the system, and redoubles the motivation to administer as many jabs as feasible. Whether the highly optimistic target of 14 million vaccines by mid-February is an impossible ask is secondary: making the promise means we will see a higher vaccination rate than if Johnson had advocated for a more conservative target altogether.

Overpromising makes practical sense, irrespective of underdelivering. This is conditional optimism – optimism with a plan, no matter how ambitious.

With the advent of the vaccine, the route out of the pandemic is well lit. In the meantime it is incumbent on governments to prevent apathy and fatalism from setting in. That requires the simple reminder that things will be better, and we know exactly how to get there.