The Irish Times view on the new Covid-19 measures: Back on a crisis footing

The State is in effect on an emergency footing. It faces a situation more grave than that which shook the country last spring 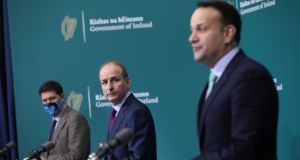 Taoiseach Micheál Martin, Tánaiste Leo Varadkar, and the Minister for the Environment Eamon Ryan briefing the media on Wednesday following a Cabinet meeting at Government Buildings

Ireland and the world have become so accustomed to the extraordinary upheaval wrought by the Covid-19 pandemic in the past year that the idea of a government ordering a shutdown of nearly all social and economic life is now just another turn in the news cycle. Recourse to such swingeing measures is not necessarily inevitable – a lockdown is proof of a failure to control the virus, after all, or at least a failure to consolidate progress made in containing its spread – but it had become clear in the past week that the Government had little choice given the uncontrolled spread of the disease in the community.

No responsible government could look at the alarming rise in hospitalisations and intensive-care unit admissions - a trend which would, unless interrupted, lead to the health system being overrun - and opt for anything but the most stringent shutdown.

And that’s largely what this is. All but essential shops are to close. Schools will be shut until the end of January at the earliest, with exceptions only for children with special educational needs and Leaving Cert students. Most building sites are to fall silent. The aim in effect is to bring the country to a halt, to force people to stay apart so that we cannot risk endangering one another with this deadly disease.

Still, the news will nonetheless be a terrible blow to those who now stand to lose their jobs or those business owners who fear they will never again open their doors. It is welcome therefore that emergency unemployment and income-support measures will be extended.

Even with full observance of the new rules, we are in for a dark and difficult month. Case numbers can be expected to rise further. Hospital admissions will follow. Many more families will lose a loved one. It would take a supreme optimist to expect that the country will be in any position to relax these restrictions in three weeks’ time. In fact, the Government could even find itself having to go further. For example, the introduction of a PCR test-result requirement for travellers from Britain and South Africa – and soon from other countries as well – will not in itself ensure that people cannot bring the virus onto the island. Only a strict quarantine system could do that, though the open border with Northern Ireland would leave a hole in any such net.

The State is in effect on an emergency footing. It faces a situation more grave than that which shook the country last spring. The difference this time, and hardly a negligible one, is that safe and effective vaccines are already being administered in our hospitals and nursing homes. For now it’s a trickle, but the rate will increase. Those vaccines will not arrest the current surge, but they do give us hope that if the country can bring the spread of the disease under control, the crisis could be entering its closing stages.