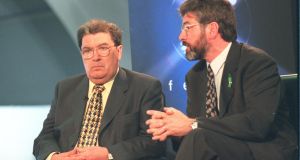 Gerry Adams privately warned John Hume that he was “worried” the IRA were close to murdering Margaret Thatcher weeks after they had assassinated one of her close personal friends, newly declassified files disclose.

In a memo, stamped “secret”, diplomat Dermot Gallagher, who went on to become the secretary-general of the Department of Foreign Affairs, briefed then taoiseach Charlie Haughey about a telephone conversation with Hume in September 1990.

Gallagher, who was involved with early peace efforts in the department’s Anglo-Irish division, said the then SDLP leader Hume had met Adams the previous week at the request of the then Sinn Féin president.

Adams told Hume he was “pleased” by remarks he made during a recent a summer school speech in which Hume did not “dismiss” the IRA “as mindless, as criminals, as gangsters”, but, while disagreeing forcefully with their methods, accepted that they “actually believe in what they are doing”.

Hume told Adams that his speech prompted a letter to him from then British ambassador to Dublin Nicholas Fenn in which the British diplomat “agreed that it was nonsense to suppose that the British presence in Northern Ireland is due to the defence of economic or strategic interests”.

The SDLP leader suggested to Adams that the then secretary of state for Northern Ireland Peter Brooke was preparing to make similar remarks about Britain having no economic or strategic interest in the North as part of confidence-building measures towards peace talks.

But, he said, the IRA murder weeks beforehand on July 30th of Ian Gow, a Conservative MP, had made that difficult.

Gow, a strident unionist, was blown up by an IRA bomb placed under his car at his home in East Sussex because of his personal closeness to British prime minister Thatcher and his sway over British policy on Ireland.

“In relation to the Gow death, Adams rather oddly said that he was worried that ‘they will kill Thatcher’,” Hume told Gallagher, according to the memo, just released into the National Archives under the 30-year rule.

The pair had a long discussion during which Hume argued for the IRA to “lay down their arms” in return for an all-island conference of all political parties, including Sinn Féin, but which unionists would presumably not attend.

The forum would allow all nationalist parties to “work out a common plan/strategy” on seeking to convince unionists of the value of a united Ireland.

According to the memo, Adams “seemed interested” and asked for a private paper on the proposal which he “would then put to the IRA”.

But Hume said Adams left him with the “strong impression that he was genuinely worried that” that if peace efforts were successful and “underpinned by joint North-South referenda, as Hume has suggested, this could undermine Provo legitimacy and credibility.”

“However, Adams felt overall that the talks were unlikely to lead anywhere,” the note added.

In a separate Government file about Anglo-Irish contacts and a briefing to Dublin by then permanent under-secretary to the Northern Ireland Office John Chilcott, Irish diplomat Brendan McMahon warned of “deep British anxiety” about the IRA’s capacity to escalate its campaign of violence at the time.

“The British clearly take the view that the Provisionals can continue their campaign of violence indefinitely at the present, or even at an increased levels,” he wrote in the memo to the taoiseach.

“This has horrendous implications for their security forces and also for the protection of public persons in Britain.”

McMahon said Tory MP and then leader of the House of Commons John MacGregor had “privately emphasised”during a meeting in London how “shaken the Conservative Party had been – and still is – by Ian Gow’s murder”.

The Royal Ulster Constabulary chief constable at the time, Hugh Annesley, had told a meeting of the Anglo-Irish secretariat that “5,000 troops could be swallowed up in any one area of the Border”.

McMahon said, from his contacts, that he suspected the British also realised the IRA could “bring down any new political structures in the North which exclude them”.

In another note about a contact with Hume, the SDLP leader told the Irish government that Brooke had promised to consider his suggestion that Chilcott visit him at his holiday house in Co Donegal, and that Hume would arrange for Adams and Martin McGuinness to call while he was there. (Records 2020/17/17 and 2020/17/10.)