State Papers: Stance was seen as an ‘own goal’ and unhelpful for North-South trade 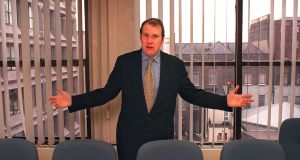 A senior Irish official put up a “determined defence” of his government’s handling of the 1996 BSE crisis against criticism from Northern officials that Dublin had taken a narrow “partitionist” attitude to combating the cattle disease.

The exchange took place over a dinner with the Northern Ireland agriculture minister and her officials at which “fish was on the plate, but beef (and BSE) were on the menu”, according to confidential notes made in May 1996.

The dinner was attended by the Irish joint secretary David Donoghue and the agriculture minister Baroness Jean Denton. However, the most pointed criticism of Dublin’s approach to the BSE crisis appears to have been conveyed by senior Stormont official Gerry Loughran, now Sir Gerry, a former permanent secretary at the department of economic development.

A confidential memo written by Northern Ireland Office (NIO) official Peter Bell records that Loughran “gave Mr Donoghue a deservedly hard time over the attitude taken by the Republic to protect, in the narrowest 26-county, partitionist spirit, their ‘national herd’ from contamination from that on our side of the Border”.

“The much-publicised deployment of the Irish security forces against the menace of Northern cattle (by implication Catholic as well as Protestant – if that is quite the happiest description) and the rhetoric of the Irish minister for agriculture [Ivan Yates] had also been dismal – and from more than one point of view.”

Loughran argued that the Irish approach to BSE “had also exposed those leading Protestant members of the NI business community who had argued consistently and, to a degree, courageously in favour of developing further North/South economic links”. The memo goes on to say that “although Mr Loughran was far too diplomatic to say so, Dublin’s rhetoric and actions had constituted, from a nationalist point of view, something of an own goal”.

A separate note drafted by JR Fisher records that “there was distinct sympathy on the Irish side for our problems in the North but also a determined defence of their protectionist response, which the Irish felt should be understood and accepted by reason of the particular importance of the beef industry to the South. Economic hardship apart, the Irish side acknowledged that, presentationally, their response was seen to have been ‘partitionist’ and unhelpful to North/South trade.”

Donoghue and Baroness Denton discussed the potential repercussions for wider North-South co-operation, noting the “views expressed by David Trimble in his recent speech to the Institute of Directors in Dublin in which he had been critical of the Belfast/Dublin economic corridor project and said that Ireland was no more an important market for NI than the north of England (or Scotland)”.

Denton recorded her disappointment over the Ulster Unionist leader’s “remarks and their tone, not least the criticism made of the joint approach to tourism”, which she regarded as “misjudged”.

Tensions on food and agricultural policy continued into 1997, the files show, as the British government voiced concern over the the preservation of fish stocks in the Irish Sea.

The more I read these papers, the more I am convinced that the NI fishing industry has got a very shabby deal as compared with our Southern neighbours

In March 1997 the NIO expressed concern at the Irish government’s intention to invoke the “Hague preference”, thus permitting it to increase its quotas of white fish stocks in the Irish Sea.

In a memo to Irish officials on the joint secretariat at Maryfield, Co Down, a senior NIO official argued that such a policy by Dublin would damage the North’s fishing industry and the hopes of the two governments to achieve reconciliation on the island of Ireland.

In a note to Gerry Lavery at the Stormont department of agriculture, dated March 7th, 1997, joint secretary Bell said that the Irish side were expecting a note from him on the issue “setting out our stall”. Enclosing his draft document, he wrote: “I have played up the NI political dimension strongly, whether in NI community terms or North-South relations”. He added that he had played down “the EU angles”.

“The Irish will know what we are after, viz that they should not exercise their quotas to the full...”

Bell informed the agricultural official at Stormont: “The more I read these papers, the more I am convinced that the NI fishing industry has got a very shabby deal as compared with our Southern neighbours.” As a result, he had “warmed” to the idea of “using the machinery of the Anglo-Irish Agreement to help to redress an unfairness in the treatment of the two parts of Ireland...”

In his memo to Irish officials at Maryfield, Bell stated that the fishing issue would be raised at the next meeting of the Anglo-Irish Intergovernmental Conference in Dublin on March 12th. He added: “It is [the NIO’s] contention that the Irish invocation of the Hague preference in relation to Irish Sea white fish stocks is not only damaging to the NI fishing industry which employs members of all sides of the community. It is also detrimental to the settled policy of both sides to promote economic cooperation and political conciliation.”

He added that the Northern Ireland fishing industry was “deeply resentful of the Irish invocation of the Hague preference, evidenced by an ongoing judicial review being pursued by the local fishermen’s body”. The solution lay in finding some accommodation involving Irish Sea white fish stocks, the official said.