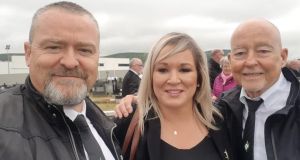 Michelle O’Neill acknowledged that she was wrong to have had a selfie taken with two of the mourners. Photograph: Sinn Féin/PA Wire

Once again Stormont is in crisis mode. The leaders of the DUP, the SDLP, the Unionist Party and Alliance want Sinn Féin Deputy First Minister Michelle O’Neill to temporarily step aside pending an investigation into her attendance at Bobby Storey’s funeral on Tuesday.

It brings us back to more than three years ago when the late Martin McGuinness issued a similar demand to DUP First Minister Arlene Foster, urging her to stand aside while an inquiry was held into the calamitous Renewable Heat Incentive (“cash for ash”) scheme.

McGuinness and Sinn Féin pretty promptly walked away in January 2017, the Executive and Assembly folded, and it took three years and the New Decade, New Approach deal to build it up again.

Is the same going to happen now?

Not for the moment, it seems.

Donaldson called for O’Neill to step aside, but unlike McGuinness in 2017 did not threaten to walk out of the Executive if she did not comply

Lagan Valley MP Jeffrey Donaldson was dispatched by Foster to lead the DUP charge on Thursday morning. He brought the DUP troops to the top of the hill, but did not advance any farther.

On BBC Radio Ulster’s The Nolan Show, he called for O’Neill to step aside, but unlike McGuinness in 2017 did not threaten to walk out of the Executive if she did not comply.

“Are we seriously saying that the right thing to do is bring the Executive crashing down because of the wrongdoing of Sinn Féin?” Donaldson asked.

For the moment, therefore, the Executive is safe but the atmosphere around the table must be toxic, and ultimately who knows where that will lead?

O’Neill put up a robust defence. She contended that she observed the rules while walking behind the Bobby Storey cortege with about 30 other mourners, as the Covid-19 regulations allow.

She also said that the observation of the social-distancing protocol inside St Agnes’s Church in west Belfast for the funeral Mass was “exemplary” – notwithstanding that about 100 people rather than the permitted 10 were in the church. Now the number permitted has increased to 30, which was the number in the church elsewhere in Belfast for Noah Donohoe’s funeral on Wednesday.

O’Neill also argued that there are “things within your control and things that are outside your control”, implying she could not control the numbers who would turn up along the road to Milltown Cemetery and in the cemetery for the Gerry Adams oration, but that within the letter of the law she acted properly.

O’Neill and Sinn Féin also made the point that they worked with the police in terms of funeral organisation and that if they hadn’t done so many thousands more would have been there.

O’Neill did acknowledge that she was wrong to have had a selfie taken with two of the mourners, but as SDLP leader Colum Eastwood allowed, that was perhaps another thing outside her control.

The PSNI is investigating but one wonders has it any grounds to take a case against O’Neill or any of the other Sinn Féin members who attended such as Minister for Finance Conor Murphy or junior minister Declan Kearney.

It is all rather unseemly but the large attendance at the funeral did annoy a lot of people, not just politicians, especially those who could not attend funerals of loved ones during the pandemic. The general view was that the spirit of the law was broken.

The point was also made that SDLP and DUP politicians did not attend the recent funerals of, respectively, SDLP Assembly member John Dallat, and of the fathers of Jeffrey Donaldson and Edwin Poots.

Perhaps had Foster shown a little more contrition 3½ years ago, as Martin McGuinness advised, Stormont might have been saved.

And perhaps, too, rather than its current gung-ho stance, had O’Neill and Sinn Féin offered some apology, the Executive and Assembly would not be in this latest mess.

Regardless, for the moment, Sinn Féin is brazening out the criticism by adopting the Dominic Cummings “I have nothing to apologise for” defence. Bobby Storey probably would have approved.

Independent inquiry to examine mother and baby homes in North 15:26
Man (55) charged over theft of cash from church collection boxes 14:20
Zero-Covid strategy could ‘save the summer’, People Before Profit says 14:14
Men alleged to have published photos of teenage killers seek to halt Circuit Court trial 13:49
Level 5 extension until March 5th: officials consider ban on all non-essential travel into State 13:44