Keep our money if you must, Ryanair. We’d rather lose our airfares than board our flight

It’s not just for health reasons. We can live with the financial hit if it helps our communities 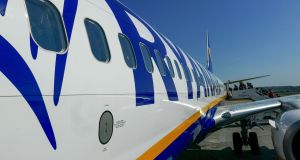 Goodbye, airfares: when our Ryanair flight leaves for Greece next week, we won’t be aboard. Photograph: Nicolas Economou/NurPhoto via Getty

Damned Ryanair. It won’t give us our money back. And damned Government. It looks unlikely to force the airline to refund us. But, to be honest, that’s actually fine with us.

We know that when our flight to Athens takes off, a little more than a week from now, we won’t be aboard. As it disappears over the horizon it’ll be taking our airfares – more than €500 that we paid back when the first coronavirus stories were still only trickling out of China – with it.

Why can we live with that? In part it’s to do with the coronavirus pandemic, and the second wave of the disease that health officials are worried about.

When we decided to abandon our plans, last month, we didn’t know if we’d be allowed, or sensible, to travel next week. And what if we had to quarantine for 14 days when we arrived for our 14-day break? Or when we returned? How would we manage either? We concluded it would be simpler to say we wouldn’t go, and find some other way to have a holiday this summer.

But there’s another reason why we can put up with losing our money. If most flights were still suspended, or a new travel ban were to mean airlines had to refund everyone, they could very well go bust. As could insurers if they had to pay out hundreds of euro on every €75 travel policy they had sold in the past year.

It’s not nice, but it’s a financial sacrifice to help get the economy going after Covid-19, in the same way we’ve sacrificed our social lives in order to help keep our family, our friends, our community free of infection

And despite all our grumbling about customer service and standing up for our rights, we’d much rather they didn’t go out of business. We’re lucky: saying farewell to our fares won’t bankrupt us. But it will help airline staff and, we hope, many other people keep their jobs. And if enough of our fellow affluent holidaymakers are also prepared to sacrifice their foreign-travel plans, we will, together, be helping to spread this bit of the financial downside of the pandemic across so many of us who, having been in the market for overseas vacations to begin with, can generally afford to take the hit this time around.

It’s not nice, but it’s a financial sacrifice to help get the economy going after Covid-19, in the same way that we’ve sacrificed our social lives – our meals out, our weekends away, our sport, our choirs and our evening classes – in order to help keep our family, friends and community free of infection.

Our compensation will be that we’ll get to holiday abroad again next year, with any luck, as Ryanair – and Aer Lingus – will still be around, and might still even be able to offer us pretty low fares.

Should governments step in and compel airlines to refund everybody? If the new Irish Government forces Ryanair’s hand it will be jeopardising the future of one of Ireland’s biggest businesses. Perhaps the airline wouldn’t go bust but would instead choose to move abroad. And perhaps, in any case, it’s just as good at minimising its tax bill as the tech and finance giants that base their European operations in Ireland are – which is to say it may not be contributing as much to the exchequer, or to the Irish economy, as we might assume. Perhaps not as many jobs rely on it as we imagine. But the effect on people’s lives could be catastrophic all the same.

One solution would be for the Government to bail out the travel industry in the way it bailed out the banks. This recession looks set to be even more serious than the one that began in 2008, after all. Giant airlines, like giant financial institutions, could be too big to allow to fail.

Or the Government could refund holidaymakers itself. But, just as it was galling to watch bankers be saved at everybody else’s expense the last time around, would it be fair to ask every taxpayer to help foot the bill for the vanished holidays of people who were rich enough to pay for them in the first place?

There could be better things to spend public funds on, not least the frontline healthcare staff, friends of ours among them, whom we have applauded so warmly as they have battled Covid-19 on our behalf, and the schools that will be doing their best to reopen safely in the autumn and so, among other things, relieve the burden that has fallen on so many people who’ve been working from home – aka parenting from work – since March.

A lot of this is easy for me to say. My wife and I both have good jobs – I work at The Irish Times – and we only needed to buy two tickets to Greece this year, as our children are now old enough to have had other plans. We might not be so sanguine if we’d paid €1,100 for the four of us to fly to Athens, or if we’d been unable to cancel our Airbnb and scrap our car hire – actions we know might play a part in putting those businesses in jeopardy too. We’d certainly be desperate to get our money back if we’d lost our jobs.

But, for us and many others like us, and in the name of doing what we can to stop our country, and our communities, from going under, is losing our airfares really so different from having continued to pay our gym-membership fees, yoga-class subscriptions or Irish Rail season-ticket instalments during lockdown? Perhaps we’ve a right to a refund. Yet, for as long as we’re able to shoulder the financial burden, we’re willing – not thrilled, but prepared – to do so.

If nobody else adopts our approach we might look like complete mugs: we could lose our airfares yet airlines, and many other companies, would still go bust. But life isn’t all about profit and loss. Not the financial kind, anyhow

More financially focused people might say we’re doing the wrong thing, might urge us to claim our money back. And if nobody else adopts our approach we might look like complete mugs: we could lose our airfares yet airlines, and many other companies, would still go bust. But life isn’t all about profit and loss. Not the financial kind, anyhow.

We’d rather have a vibrant, diverse, Covid-free community come this time next year. That includes all the people who work for Irish companies (or for any companies, really). We’d like those businesses to survive, so we can be their customers again, just as we’d like their staff to still be buying The Irish Times, or subscribing to irishtimes.com, 12 months from now, or still go to our neighbour when they need an optician, or go into the local bookshop to pick up a novel whose author we’re excited to know.

Money needs to keep moving around the economy for that to happen. With luck our €550 will help somebody else stay afloat. And instead of getting away to Greece this month we’ll be holidaying in Ireland, as we have done for the past three summers. We won’t have as much spending money. Ryanair’s probably keeping that. But losing our airfares is an acceptable price to pay to keep a strong community right here around us at home.