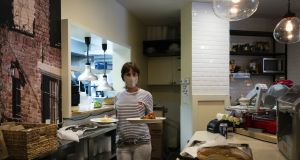 The Government is facing a furious backlash from publicans and restaurants over new regulations. File photograph: Eva Marie Uzcategui/Bloomberg

The Government is facing a furious backlash from publicans and restaurants over new regulations which require them to keep records of the meals ordered by customers and other details.

Both the Restaurants Association of Ireland and Licensed Vintners Association have written to the Data Protection Commissioner seeking a view on the new requirements, while Fianna Fáil TD Marc MacSharry hit out at what he described as “Stasi” guidelines.

In a message to members of his party, Mr McSharry called on the Taoiseach to reverse “police state restrictions” which he described as “authoritarian”, “unnecessary” and “ridiculous”.

The new rules, which came into effect on Thursday, will compel restaurants and pubs serving food to make a record of all meals ordered. They must be able to make the records available to a member of An Garda Síochána for up to 28 days after the meal.

Meanwhile, the Government has been urged not to “stigmatise” people who contract Covid-19 by placing too much emphasis on “individual responsibility” to avoid the illness.

After months of public health warnings about personal behaviour such as hand washing and cough etiquette, public health experts have been told that a “different approach” to communications may be needed.

The warning comes from the behavioural change group, a subgroup of the National Public Health Emergency Team (NPHET). Members of the group received the results of an ESRI study which revealed that even with severe Covid-19 symptoms, one in four people reported being unlikely to call their GP immediately.

There was also a view expressed that “too much focus on individual responsibility could be stigmatising, that we need to constantly remind there is no shame in getting Covid”.

The warning about the limits of the current public health messaging comes as new research from the Department of Health has found the public remains fearful of a second wave of the virus and nervous about opening up the country. More than half (56 per cent) of respondents said the Government response was “appropriate” while 36 per cent said it was insufficient.

Senior sources admitted there were divisions in Government over the pace of reopening of society, and especially on the question of how and when pubs that do not serve food – so-called “wet pubs” – should be allowed to reopen.

On Wednesday, Tánaiste Leo Varadkar told Fine Gael TDs that such pubs should be given a chance to reopen and prove they can operate safely, but Taoiseach Micheál Martin and Minister for Health Stephen Donnelly are understood to be more cautious.

Mr Martin promised on Thursday that further guidelines for pubs that have not yet reopened will be issued “shortly”. These guidelines “will involve conditions to protect lives and people’s health”.

Public health experts also on Thursday discussed aspects of the Government’s proposed long-term plan for how Ireland will live alongside Covid-19, which is expected to be published on September 14th. The first draft of that plan is expected to be circulated among Ministers next week.

Green Party leader Eamon Ryan told the Dáil the plan was “as important as, if not more important, to my mind, than the budget”.

He said the Government was looking at testing arrangements that “may allow us to waive the requirement for 14 days’ restriction on travel” when someone comes into the State.

Meanwhile, Minister for Culture Catherine Martin and Mr Donnelly will meet sporting bodies on Friday over hosting large events. Sources have indicated more fans may be able to attend rugby, GAA and football matches if strict rules are put in place around the entrance and exit areas of stadiums. The meeting will also be attended by the acting chief medical officer, Dr Ronan Glynn.