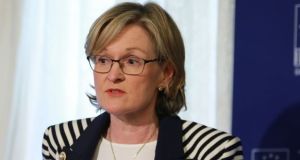 Three senior Fine Gael figures appear to be in the running to replace Phil Hogan as Ireland’s European Commissioner.

Commission President Ursula von der Leyen has asked the Government to send her the names of two people - one man and one woman - as she pursues a goal of gender balance in her cabinet.

Taoiseach Micheál Martin, Tánaiste Leo Varadkar and Green Party leader Eamon Ryan discussed the matter on Monday, apparently without coming to a conclusion. The Government wants Ireland to retain the Trade portfolio, but this is by no means guaranteed.

Minister for Foreign Affairs Simon Coveney said on Monday he is not ruling himself out as a candidate.

However, he added that he would need to be convinced that he could add “significant value” to the country’s chances at increasing the profile of Ireland at EU level.

Mr Coveney said the Government and Mr Martin were trying to establish if that is the case.

Speaking to RTÉ, Mr Coveney said he was part of discussions taking place within Government about Mr Hogan’s successor, but added that national politics was “and still is” a huge part of his life.

Asked about reports that the Government may only put forward one candidate for the role, Mr Coveney declined to comment, adding that it was a decision for the party leaders.

Mr Coveney said he believes a decision on the matter will be made “in the coming days”.

Fine Gael MEP and former minister for justice Frances Fitzgerald confirmed on Monday morning that she was interested in the post, acknowledging that it was a “difficult decision” for the Government. She has taken soundings in Dublin in recent days, it is understood.

On Sunday, MEP Mairead McGuinness, a vice-president of the European Parliament, confirmed she was seeking the job.

Mr Hogan resigned from his position following controversy over his attendance at an Oireachtas golf society dinner and questions around his movements throughout Ireland before and afterwards in apparent breach of Covid-19 guidelines.

Sources in Brussels said that Ms McGuinness - a strong contender for the next presidency of the parliament - was highly thought of by Dr von der Leyen.

But Brussels sources also stressed that the Commission expected the Government to nominate two names - a woman and a man - for the post, with the final decision up to Dr von der Leyen.