Miriam Lord: Watch out for the pork chop police on the scent of €9 meals 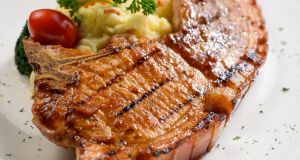 Would a €9 pork chop be a suitably priced food offering to appease the hungry Covid gods? Photograph: iStock

If all goes well, the sun will set in November and the police can take their noses out of your pork chops.

But there isn’t a great amount of confidence around Dáil Éireann that this will happen.

Some TDs fear temporary “draconian” laws aimed at keeping publicans and their customers on the right side of heavy Covid-19 restrictions will be kept in place after a time-limit runs out, despite a sunset clause in the legislation to assuage concerns that squads of pub-grub militia are about to be let loose on a quivering populace.

They will use their strong enforcement powers to identify and hunt down a new sub-class of cocktail sausage criminals and serial sing-song offenders in the lounge bars of Ireland.

But to dispel worries that this move represents the Government’s first steps towards establishing a police state and a communist-style dictatorship (yes, Danny Healy-Rae, we’re looking at you), the sunset clause is there for the avoidance of worry. Along with an option to roll over the Bill if necessary when November comes along. It will all depend on the Covid situation.

So will the cut-off clause kick in? Or will it be rolled over forever?

“I simply don’t know,” said the Minister for Justice, to the grim dissatisfaction of those Independent deputies already complaining about the jackboot of Government on the put-upon posteriors of rural publicans.

The new law isn’t in operation yet and gardaí are going around the place inspecting mixed grills and meat teas. And even they can’t be expected to eat them all

However, Helen McEntee hopes all pubs can reopen when the new “roadmap” for dealing with the pandemic is launched in a couple of weeks. Roadmap? Sure that’s only rubbing it in when decent people can’t drive down their local boreen for a pint any more without Shane Ross’s transport Stasi breathalysing them.

Tipperary’s Mattie McGrath was very annoyed. As were the Healy-Raes. With a short-lived reserve and understatement, Danny declared, “I am very cross with what is going on.”

Things are bad enough, and that’s before you even get to the plight of those publicans who have been closed for more than six months because they don’t have a suitably priced food offering to appease the hungry Covid gods.

The new law isn’t in operation yet and gardaí are going around the place inspecting mixed grills and meat teas. And even they can’t be expected to eat them all.

The Rigs and the Regs (Rural Independent Group and Regional Independent Group) members have no end of stories to tell about the situation as it currently prevails, what with being rung up with personal stories from publicans every hour of the day and night.

Inside Politics · As the Dáil returns, can the Government regroup?

Mattie was still reeling from one of his most recent communications.

“I got an email this morning about two gardaí visiting a premises looking at the plates to see whether the pork chop, or the burger or the pizza was valued at €9,” he informed the Dáil during a debate on amendments to the new measures. “Well, I would know after eating it what it was worth but gardaí are not qualified to know whether what is on a plate is worth €9, €6.50 or €4.50.”

We’re not too sure about that. Any garda of our acquaintance has always had a keen and up-to-date knowledge of the current pricing levels in local nosheries.

Mattie then revealed he was told by somebody in NPHET that they never came up with the idea of a €9 meal as a means to getting gargle in a pub. “It’s ridiculous and childish.”

No. He is not happy at all.

“The Government is dangling a string in front of publicans, but as well as that, it is tying two hands behind their backs and blindfolding one eye,” he railed.

Along with the vast majority of his Dáil colleagues, he voted to support the original emergency legislation rushed in when the pandemic hit and nobody knew what might happen. But not now, when there has been time for reflection on how parts of society, particularly rural pubs, have been damaged by the emergency changes.

“We have been all good citizens here. We have bought into this, but the people are tired and weary and this is going to backfire spectacularly on you, Minister ... We must all keep safe and respect the virus, but we have to live as well,” he told McEntee, who was not for turning on requests to tweak the legislation.

“You are not allowing the people to live and it’s Big Brother overarching here and it’s diabolical. It’s disgraceful. It’s disgusting. It’s GUBU days, to be honest, and I totally object to it and resent the kind of smug way you’re doing this here. It’s just sickening,” thundered Mattie.

Michael McNamara wondered if the particular focus on pubs (when meat factories, for example, remain open) has less to do with risk and more to do with “moral opprobrium and our disapproval of certain behaviour”.

The Clare Independent TD stressed: “I’m not a Covid denier, not for a minute,” which was good to know, given that he’s the chairman of the Dáil Covid Committee. But he thinks the Government’s draconian policy on pubs is sucking the life out of rural Ireland.

Time to mention the Tánaiste so, still happily pronouncing like a Taoiseach on the Covid situation. It didn’t escape McNamara’s notice that Leo Varadkar reportedly told his parliamentary party “that Ireland is completely out of kilter with every other European state”.

Armed with this supportive evidence, he wondered what is so different about the pandemic here, apart from us being “more draconian with restrictions” which “have failed”, leaving us with similar figures to countries where the pubs stayed open.

The publicans in Kerry are “totally dismayed”, reported Michael Healy-Rae. “Whether ‘tis from Currans, to Cahersiveen and every place in the middle they’re upset. They’re upset at legislators here trying to propose how to close them down before we allow them to open up. It just doesn’t make sense.”

Labour’s Brendan Howlin is in favour of closing premises where rules are being ignored, but he argued the legislation is not clear on how and where the gardaí can enforce these new powers. Nor does it allow a publican to challenge a closure order short of seeking a judicial review, which would cost a fortune.

But for all the shouting from others about dictatorships and the persecution of pub landlords, there was a contrary that these laws are unfortunately necessary to root out rogue operators abusing the situation when the vast majority of business are acting within the rules.

Vintners who can’t open are watching this carry-on and asking for something to be done about it. “I accept and understand that that is what the Bill will do,” said Martin Kenny, explaining why Sinn Féin generally supports it.

Government deputies felt the measures were needed for the sake of fairness. To stop scenes of “drinking ad lib and dancing on counters”, as Fine Gael’s Bernard Durkan put it.

But where is the hope, wondered Social Democrat Catherine Murphy. The Government has gone from appealing to people’s best nature “towards a more punitive approach”. People will have to live with the virus but the new approach of ‘if you don’t do this, this is what we’ll do to you” is not bringing people along with the view we must all learn to live with the virus.

It is almost encouraging a “Valley of the Squinting Windows” attitude. “I’ve got to say I do think we need to stop and think about just exactly what damage is being done in addition to Covid.”

In the meantime, watch out for the pork chop police and pin your hopes on November.