Hospitality industry frustrated by ‘lack of communication’ around updated guidelines 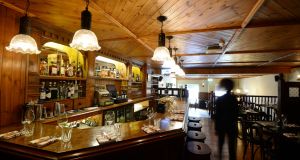 The new rules oblige pubs and restaurants to keep a record of what substantial meals customers have ordered for 28 days. Photograph: Alan Betson

Restaurants and pubs serving food have expressed concern about new regulations that will oblige them to keep a record of what substantial meals customers have ordered for 28 days.

The hospitality industry has expressed frustration at what it claims has been a lack of communication around the regulations,which were contained in updated guidelines published by Fáilte Ireland.

The Licensed Vintners Association (LVA) and Restaurants Association of Ireland have both written to the Data Protection Commissioner to seek advice on the new measures.

The new rules, which came into effect on Thursday and will remain in force until September 14th, will compel restaurants and pubs serving food to make a record of the substantial meals ordered by each member of a party permitted to dine in a premises.

Restaurant and cafe owners must be able to make the records available to a member of An Garda Síochána for up to 28 days after the meal for the purposes of an inspection.

Adrian Cummins, chief executive of the restaurants association, said the record-keeping would “add more regulatory burden for businesses at a time of extreme stress for many restaurant owners”.

He said the association was “deeply concerned” that the Government had not communicated the regulations when the guidelines were introduced on August 18th.

A spokesman for the LVA said the new guidelines were published by Fáilte Ireland “with zero consultation with the industry”.

“The first notice the LVA received was a one-line email sent just before 11am on Thursday which gave no specifics, just mentioned the guidelines had been updated.

“No thought has been put into the administrative burden this is going to create. How is it going to help protect public health knowing what topping was on a customer’s pizza or what way their potatoes were cooked? We think this is a complete overreach.

“Given the data collection requirements this will place on the industry, we have asked the Data Protection Commission for its views on this new measure.”

Fianna Fáil TD Marc MacSharry on Thursday wrote a message to Taoiseach Micheál Martin and Fianna Fáil Ministers appealing for “immediate intervention to alter the ‘Stasi’ guidelines issued to restaurateurs and gastric publicans whereby it will now be required to take details of who is in and now, incredibly, what they have had to eat”.

“This is a step way too far and I appeal to all of you to urgently reverse this authoritarian and unnecessary nonsense. We have had successful lockdowns.

“In any event, today’s guidelines as published are ridiculous. I would make this point at the parliamentary party meeting if we had any and so I just text collectively in hope and desperation that collectively you will urgently address the police state restrictions announced today.”

Earlier, the Taoiseach said guidance on the issue of pubs being reopened was being worked on as part of the Government’s new long-term roadmap for living alongside Covid-19. He said guidance to pubs “will issue shortly”.

Meanwhile, the Northern Executive has deferred any decision on when or whether Northern Ireland’s 600 “wet” pubs, which do not serve food, can open.

Deputy First Minister Michelle O’Neill said she hoped the Executive would be able to provide an indicative date for the opening of such pubs when it meets again next week.