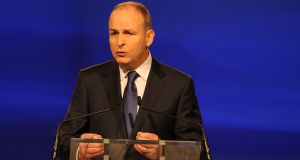 ‘We have to accept the harsh reality of this very moment,’ Micheál Martin told delegates at the Fianna Fáil ardfheis. Photograph: Stephen Collins/Collins

But enough of the past.

Stuffed on a massive feed of Seán Lemass, Éamon de Valera and the founding fathers of Fianna Fáil, the contented delegates sat back in their seats, popped a waistband button and prepared for galloping indigestion to return.

The history was sweet.

The present day, not so palatable.

Oh, but they could have feasted for ever on the songs and stories of the good old days (is there anything to be said for another quivery clip from Dev?) and never stopped swapping yarns of more recent nights when it felt like they owned the entire world and not just every sweaty inch of public space in the sprawling Citywest complex.

Born to it, they reminded themselves on Saturday night with loads of stirring, comforting newsreel incontrovertibly placing their party – not those showy late arrivals from Sinn Féin – at the scene of the birth of the nation.

“Fianna Fáil – The Republican Party.” That time-honoured slogan, with its well worn “An Ireland for All” tag line, was writ large on the platform when the current leader came to administer a dose of political reality after the nostalgic wallow.

“Fianna Fáil – The Responsible Party. Tolerating Fine Gael in the National Interest” is what it should have read.

This was the thrust of Micheál Martin’s message and also the main reason why his troops, despite all those soothing shots of history, were feeling somewhat dyspeptic at their 79th ardfheis.

Keeping a Fine Gael government in power through a confidence-and-supply agreement is proving increasingly hard for them to stomach. They’ve tolerated two years of it now, and the thought of enabling a cast of cocky Blueshirt pups to run their country for much longer has them all feeling distinctly queasy.

So in what amounted to a “bear with me” speech, Micheál had to persuade them to persevere, no matter how much it might stick in the craw. He told them he feels their pain and, if it’s any consolation, he would love to give Fine Gael the order of the boot. It’s in his power to pull the plug, but he can’t. The “massive risk” involved in triggering a general election while Brexit still remains such a threat to Ireland is too big a price to pay.

“In normal times, there would be no question about what should happen to this government, but we have to accept the harsh reality of this very moment,” he told delegates, aware of the other harsh reality that if he doesn’t convince them to back his agreement with Fine Gael, they may pull the plug on him.

Having spent the evening enjoying a “special 1919 commemoration”, Micheál plunged his audience straight back into history, invoking the names of the Fianna Fáil greats, from “the first chairperson, Constance Markiewicz”, to bolster his argument that they must do the right thing. “It’s a difficult decision for us, but it’s the right decision and it reinforces the fact that Fianna Fáil is putting the national interest first.”

There was loud and virtuous applause from the faithful, who were really clapping themselves, their selflessness and commitment to country. Given their visceral hatred of all things Fine Gael, endorsing Micheál’s confidence-and-supply arrangement a little while longer was the most heroic thing these dyed-in-the wool Fianna Fáilers could do apart from dying for Ireland.

This was only a one-day ardfheis, but one day is enough for anyone. It began with Cork TD Billy Kelleher plastering the long, private approach road to the hotel with election posters urging party members in Ireland South to vote for him in the forthcoming European election selection convention. He had more posters inside the building – full length and in your face.

Micheál Martin said last week that he would prefer if Kelleher ran again for the Dáil instead of looking for a seat in Europe. He laughed off suggestions that his TD for Cork North Central had given a resounding two fingers to that suggestion.

As for Billy, he acted the wide-eye innocent all day as smiling delegates sidled over to tell him he was an awful man altogether for putting it up to Micheál like that.

An elderly man cornered him outside the session on affordable housing, grabbing his hand. “Jaysus, you’re a terrible hoor! Fair fucks to ya!” Billy looked at him. “Wha’? I thought everyone was putting up posters, like.”

The 1919 commemoration was hosted by Éamon Ó Cuív, grandson of Éamon de Valera. Not that he makes a big thing about it or anything. Ronan McGreevy of The Irish Times spoke at length about the Seán Lemass tapes. St James’s Brass and Reed Band from Dublin and the Bishopstown sign-language choir from Cork performed the national anthem to mark its 110th anniversary.

The hall was like a sauna, full to capacity, with disappointed delegates left outside. The audience profile was on the elderly male side of mature, although there was also a large contingent from Ógra Fianna Fáil, all dressed to the nines. There seemed an unusually high turnout of teenage girls wearing glittery mini-dresses, but they wandered by mistake into the aftermath of the leader’s speech while trying to find where Romanian crooner Ovidiu Rusu, was performing. (Upstairs. Sold out.)

From our vantage high up in the back, the amount of bald heads and grey hair was striking. Younger colleagues were highly amused by the number of old flip-phones and Nokia phones in use in our vicinity.

The much sought after warm-up speech slot went to rising star Lisa Chambers, who is the party’s Brexit spokesperson. The Nokia contingent were mightily impressed, even though Lisa is from Mayo and they had taken to quietly exclaiming “Up the Rebels” every so often. She appeared on stage in a striking white dress (perhaps in tribute to the nurses). “That’s the Chambers one,” said one of the Nokia lads. “Oh, that’s right” said flip-phone. “A lovely-looking girl. I think she’s very good.”

To underline the gravity of the message, Micheál Martin burst into the hall without the usual loud blast of young people’s music. But everyone cheered anyway when he raced on to the stage. He was alone. Alone in a sea of blue, which may have been a metaphor.

As he neared the end, perspiring from the heat, we scanned the front rows for likely platform athletes. Kevin O’Keeffe for Cork East looked a likely contender, head shining and sweating up like a horse before a big race. Then Robert Troy from Longford-Westmeath pulled on his jacket, which seemed unusual.

The speech finished. Robert shot like a bullet from his chair and tore across to the steps with about five female politicians in hot pursuit. In the blink of an eye he was at his leader’s shoulder. But he barely managed to clap him on the back before being mown down by the women and relegated to the back of the scrum.

As Brexit bears down on history, Micheál will soon find out if being the responsible party resonates with the nation’s voters and if tolerating Fine Gael in the national interest secures his future in the Fianna Fáil interest.

Mary Lou McDonald asks uncertain voters to give Sinn Féin ‘a chance’ 16:21
Rape trial finishes following death of the accused 16:19
Ex-RTE broadcaster Valerie Cox to run for Dáil seat in Wicklow 15:49
Murder accused told detective he had done ‘something terrible’, court told 15:48
£1,000 pay rise for NI politicians a ‘slap in the face’ for workers 15:28
SUBSCRIBER ONLY