Coveney: Ireland will not be used as ‘pawn’ in EU-UK talks

State will be ‘stubborn’ in Brexit negotiations to defend Irish interests, says Minister 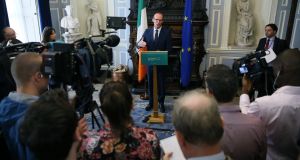 Mr Coveney welcomed the commitment to upholding the Belfast Agreement and the Common Travel Area, as well as efforts to maintain peace funding for the Border region, but warned delivering on the aspirations in the paper would be difficult.

“There are still significant questions that are unanswered in terms of how we are going to manage and maintain as close as possible to the status quo on the island of Ireland in terms of free movement of goods and services in the future and ensuring that we maintain an invisible border.”

Coveney said the British paper represented a negotiating stance which needed to be teased out with the team led by the EU’s chief Brexit negotiator Michel Barnier so “compromise positions” could be found.

He said Ireland would be “stubborn” in its defence of Irish interests in all its engagements.

“We will be realistic and fair but we will also be stubborn in relation to defending Ireland’s interests,” he said.

“Certainly we are not going to be used as a pawn here in any bigger negotiations.”

Referring to the paper on future customs arrangements published on Tuesday, Mr Coveney said he welcomed language he had not heard before about a customs union partnership.

However, he dismissed as “totally unworkable” one proposal that would involve the UK mirroring the EU’s requirements for imports from the rest of the world where their final destination is the EU.

“I don’t see how that could work. There are all sorts of problems with that that I think we understand very well on the island of Ireland in the context of smuggling and so on.”

Speaking in Iveagh House on Wednesday afternoon, Mr Coveney said the paper focused on Northern Ireland and the Republic seemed to recognise that technology was not going to solve the border issue.

A unique political solution that did not have any precedent was required, he said.

He welcomed a commitment to continued North/South and East/West cooperation that he said would cover areas such as education and healthcare.

Mr Coveney questioned what would happen in the event of another outbreak of foot and mouth disease once Northern Ireland was outside the EU.

“Does that mean that we can pretend that this has happened in a third country and doesn’t impact on the European Union? Of course it doesn’t.”

The UK has explicitly ruled out any Brexit deal that would involve a border between Northern Ireland and the rest of the UK.

On Wednesday the European Commission said how to maintain the Common Travel Area and protect the Belfast Agreement must be discussed “before looking at technical solutions”.

Mr Coveney said the immediate focus for the coming rounds of negotiations remained on advancing issues relating to Ireland, along with citizens’ rights and the question of a financial settlement between the EU and UK.

He said significant progress would have to be made on these issues before discussions on trade and future relations between the EU and UK began.

Mr Coveney said the Government was liaising with Mr Barnier and his team on a daily basis and this would intensify as negotiations continued.