Cliff Taylor: Plan will not survive contact with enemy when negotiators get to Brussels 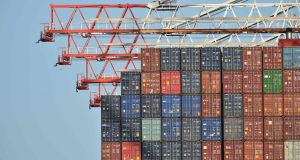 The key issue is how to control goods entering Britain from third countries and ensure the correct rules and tariffs are applied before they enter the EU. Photograph: Glyn Kirk/AFP/Getty

The document from the British government on how trade might operate after Brexit shows how politics and economics are colliding to create chaos. London has tried to cover up the cracks in the British cabinet by dancing around the key decisions, while at the same time seeking to assure British businesses that it does not plan to crash out of the EU without a deal on what happens next.

The result is a fudge which will not fly with the rest of the EU. This plan will not survive contact with the enemy when the British negotiators get to Brussels.

Before Brexit we did not spend much of our time talking about the EU customs union. It is the agreement which allows goods to circulate freely within the EU. It also means that goods imported from outside the EU can move without restriction around the EU, once they clear customs at the first point of entry.

It is a normal part of business now for companies across the union – and in Britain – for example allowing car parts to be manufactured in France and assembled in the UK, or goods to move from Ireland through the UK for onward sale in Germany, France or wherever.

Britain is trying to hold on to the advantages of this – in so far as it can – while at the same time winning flexibility to negotiate new trade deals with other countries, such as the US. At the same time, London is trying to come up with a plan which keeps the hard Brexit lobby happy, while avoiding the cliff-edge fall out of the EU in March 2019 which business fears. And all this while also claiming a hard border on the island of Ireland will not be needed.

The resulting confusion is best seen in its approach to the customs union. It would make sense for Britain to propose to remain in the customs union, certainly for a transition period after Brexit and – from an economic point of view – beyond that as well.

However the hard Brexit lobby insists “Brexit means Brexit” and Britain must leave the EU single market and the customs union. To try to ride both horses at once, the document suggests that Britain will leave the customs union when it leaves the EU in March 2019, but that it will seek to have an interim period when it would have a “continued close association with the EU customs union for a time-limited period after the UK has left the EU”. This, it says, could involve a common external tariff and no customs processes and duties between the UK and the EU.

Now, using the duck test, this would mean in effect that Britain wants to remain a member of the customs union, in all but name, during the interim period. But at the same time it would see itself as free to start trade negotiations with other third countries. This won’t fly with the rest of the EU. Why should they agree to it? They are likely to tell Britain that it is either in or out of the customs union during any transition – and if it is in, it plays by all the rules. This has echoes of the wider Brexit dilemma for Britain – it can’t hold on to the advantages of EU membership, while at the same time implementing its own policies in areas such as immigration.

Beyond the transition period, wider questions appear about a long-term UK/EU trade deal. The paper sees two possible solutions. One is to erect customs borders, but to try to keep them as seamless as possible. There is no doubt that advanced IT can help, but a border is still a border and the paper concedes that the administrative burden on business will rise. The economic nonsense of Brexit is exposed again – a whole load of new IT and customs investment for something that is worse than the situation which currently exits.

The second option seen by the paper in the longer term is some kind of new customs union deal between Britain and the EU, which the document says could avoid the need for a UK/EU goods border. This looks even less likely to come into being .

The key issue here is how to control goods entering Britain from third countries and ensure the correct rules and tariffs are applied before they enter the EU. The document makes suggestions on policing this, but they don’t look very convincing. Also, the same issue applies for the EU. Why sign up to this deal which gives Britain so many benefits of a customs union without the same obligations as the rest?

Given the incoherence of the British approach, the best strategy for Ireland – for the moment at least – seems to be to keep pushing for Britain to remain in the customs union. The document says that it won’t, but a lot of talking still lies ahead.

We also need to play the Border card as hard as possible. Britain has ruled out Border controls between the North and the UK. It also says it does not want a hard Border on the island. But if Britain is out of the customs union, a Border and some kind of controls will be needed. Otherwise how will the movement of goods be controlled? Or will we leave it to the smugglers?

This Border issue is where we need to dig in. We also need to be ready for some serious rows when the talks start again in a few weeks, with all the unwelcome uncertainty that will bring. The most overused phrase we will hear about Brexit in the weeks ahead is “the clock is ticking”. But, as ever, it is.