British MP predicts there will be a united Ireland by 2037 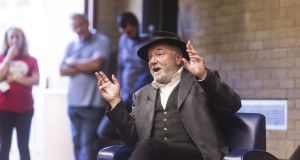 Brexit and demographic change will lead to a united Ireland by 2037, the former British MP George Galloway has said.

“The feeling of wishing to remain within the European Union will sufficiently divide the forces hostile to reunification so that there will in my lifetime be a majority for unity,” he told The Irish Times.

“Hard Brexit, soft Brexit. Hard border, soft border. How about no border, how about unity?”

A life-long supporter of Sinn Féin, the left-wing politician said he believed the party had the capacity to reunite Ireland by emphasising to unionists the economic benefits of remaining within the European Union as part of Ireland.

“Brexit is an accelerator. There is a segment, quite a substantial one, of middle class, educated, relatively prosperous people from what we might call the unionist community that has everything to gain from Irish unity and from the EU.

“Of course, greater effort has to be made on the part of the republican party to make clear that what’s being talked about is a new Ireland, a new agreed Ireland, not one that is an imposition on one community but one that can be agreed across communities.

“The decades of armed conflict distorted that possibility almost out of all recognition, but now that there is peace there is possibility,” he said. “I think there’s a lot of people there in the unionist community who would do well out of unity.

“They have experience, their work ethic, their drive, their own traditions, that would make them successful and the republicans have to assure people that in a united Ireland you could still have your Apprentice Boys commemorations, no one’s going to stop you from doing that.

“In fact, people might even respect you for your fidelity to your own traditions. That kind of dialogue and narrative has to be developed – and is being developed — and I think it can be successful.”

Mr Galloway also pointed to the “changing of the guard” in Sinn Féin and its focus on young, female leaders, as well as the secularisation of Irish society, as developments which should further reassure unionists.

“Unionists have much less to fear than they had before. They feared being subsumed in a Roman Catholic, priest-ridden, bog-trotting Brigadoon, and in the past that might have had some purchase, but it no longer does.

“It’s much more possible, much more attractive now for Protestants who believe in the European union to make the transition and I hope that they will.”

The outspoken MP, who was expelled from the British Labour Party over his statements opposing Britain’s involvement in the Iraq War, said he believed the responsibility now lay with the British government to restore power-sharing in the North.

“The cause of the collapse of the devolved administration is the scandal, still unresolved, of cash-for-ash, and the inexplicable refusal of the DUP to go down the line of respect for the Irish Language Act.

“It’s better that there is a devolved assembly than direct rule from London, but if it doesn’t happen it won’t change the course of events because this march [towards Irish unity] I think is ineluctable because of demographic change and because of the Brexit issue.”

Speaking to The Irish Times during a visit to Derry as part of the Gasyard Féile, Mr Galloway said he intended to visit the grave of the North’s former deputy first minister, Martin McGuinness, who died earlier this year.

“I was a friend of Martin McGuinness from 1990 until his tragic early demise, and I respect him very much. This will be my first opportunity to visit the grave and I’m honoured to do so.”