Minister trailing in Fine Gael leadership race, but says he will see contest through 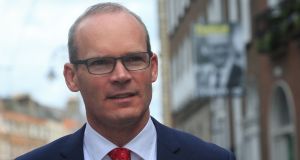 Simon Coveney is hoping that grassroots Fine Gael members will resurrect his campaign for the party leadership by persuading their local TDs to switch their support from his rival Leo Varadkar.

Mr Coveney is trailing in the race to succeed Enda Kenny as party leader but insists he will see the contest through to the finish, a development welcomed by Mr Varadkar.

Mr Coveney believes some TDs and senators may switch support, and sources in his camp say the input of members could have a “knock-on effect”.

“Some people are going top-down, we are going bottom-up. That is going to have a knock-on effect at some stage.”

The 21,000 members are allocated 25 per cent of the overall vote, with 65 per cent for the parliamentary party and 10 per cent for councillors.

It is expected that Andrew Doyle, the Minister of State for Agriculture and a constituency colleague of Minister for Health Simon Harris, Mr Coveney’s most senior supporter, will declare for Mr Varadkar today.

Mr Varadkar will travel to his Wicklow constituency for an announcement. His team has prepared a “get out the vote” operation for party members, such as helping people travel to the 26 polling stations that open next week.

“We want as big a mandate as possible,” said a source in Mr Varadkar’s camp. “We care about the members and we want their vote.”

Fine Gael officials anticipate a turnout of around 50 per cent when polling opens for four days next week.

Mr Coveney published his policy platform yesterday and drew on the “just society” tradition of Fine Gael, which focused on social reform.

The Cork South Central TD worked with Mark Fitzgerald, son of former taoiseach Garret Fitzgerald, to “fully understand and appreciate the thinking and approach to the work done by Garret, Declan Costello and Tom O’Higgins”.

Mr Fitzgerald said Mr Coveney’s platform is “absolutely consistent with the original Just Society document” but is “updated to reflect the challenges and opportunities facing Ireland today”. The Coveney campaign is interpreting this as an endorsement from the Fitzgerald family.

Mr Varadkar will set out his policies on Monday .

Meanwhile, former Fine Gael leader Alan Dukes broke from a practice that former leaders do not get involved in leadership contests. He said he was “inclined to favour Simon [Coveney]”. “Leo has so far run a sharper campaign than Simon but a vote is not a vote until it is in the ballot box,” he said.

Mr Dukes said he had not been leader in 25 years and had a long enough “decompression period”.

Mr Coveney said Michael Noonan has supported his decision to stay in the race, but did not say if Mr Noonan would support his candidacy.