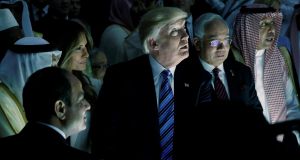 Donald Trump’s first trip abroad as president of the US was always going to be closely watched, but the series of controversies that assailed the White House in the 10 days preceding his departure made the trip even more highly charged.

The two-day visit to Riyadh that opened Trump’s nine-day foreign itinerary is likely to be painted as a success by the White House.

Despite Trump’s previous anti-Muslim rhetoric, the president was warmly welcomed in the Gulf, where Saudi Arabia spent tens of millions of dollars on his visit.

This is unsurprising. Saudi Arabia and other Middle Eastern and gulf states such as Bahrain and Egypt have been keen to renew relations with the US following the Obama administration, which was harshly critical of the regimes in place. Trump’s decision to host Egyptian president Abdel Fattah el-Sisi at the White House last month was a signal that he was prepared to engage with regimes that had been shunned by the Obama administration.

That the current president chose Saudi Arabia as his first trip abroad is indicative of a typically Trumpian policy of placing trade and defence priorities over human-rights concerns.

His vow that the US should not “lecture” others or “tell other people how to live, what to do, who to be, or how to worship” in his speech on Sunday may be welcome to many ears following a series of ill-fated interventions by the United States in the Middle East, but it equally suggests that Washington is prepared to overlook the litany of human-rights abuses perpetrated by Saudi Arabia.

The US unveiled an ambitious series of defence agreements with Saudi Arabia and also secured a number of lucrative Saudi investments in US companies including General Electric and investment firm Blackstone.

While Riyadh is likely to welcome Trump’s tough talk on Iran in his speech, he has yet to follow through on his election pledge to renegotiate the Iran nuclear deal struck by his predecessor and international allies.

Trump’s move to stay on script and refrain from using Twitter will also be seen as something of a coup in light of his behaviour in the past 10 days, when he has taken to social media to berate critics and deliver opinions on the appointment of a special counsel to oversee the Russia investigation.

The next stage of Trump’s visit could prove more challenging. He arrives in Israel on Monday, where he is due to visit the Western Wall and Holocaust memorial Yad Vashem before dining with Israeli prime minister Binyamin Netanyahu. On Tuesday he is due to meet the head of the Palestinian Authority, Mahmoud Abbas, in Bethlehem.

While Israel will welcome his tough talk on Iran, it will be less enthused at the arms deal with Saudi Arabia announced on Saturday.

Trump’s visit has already been beset by controversy after revelations that Israel was the American ally that was the source of classified information shared by Trump with the Russian foreign minister Sergei Lavrov and the Russian ambassador at a meeting in the White House earlier this month. Potentially more sensitive is the refusal by national security adviser Gen HR McMaster to state whether he viewed the Western Wall as part of Israel – an issue of huge significance for Israel.

Local media reports on Sunday claimed that Netanyahu was forced to order a number of his government ministers to attend a reception greeting Trump at Ben Gurion airport after discovering that several planned to skip the event.

Two days into his first foreign visit as leader, Trump has so far steered clear of major controversy. But with visits to Israel, Italy and Belgium still to take place, straying into complex diplomatic territory may be less easy to avoid.