New Dublin ‘urban quarter’ will have more than 1,000 homes

The demolition of the final block in the current regeneration phase of St Teresa’s Gardens has taken place.The 1950s complex is being demolished as part of a Dublin City Council social housing regeneration scheme. Video: Bryan O'Brien 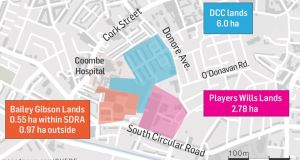 Dublin urban quarter: the lands are made up of the former Players Wills cigarette factory, the former Bailey Gibson packaging plant, and St Teresa’s Gardens

Plans for the development of more than 1,000 homes on lands off the South Circular Road in Dublin will be available for public consultation from Monday.

The lands are made up of three separate sites: the former Players Wills cigarette factory and the former Bailey Gibson packaging plant, both of which face onto the South Circular Road, and St Teresa’s Gardens, a Dublin City Council flat complex at the back of the factories.

The factory sites are privately owned and have been vacant for more than a decade. They were combined during the boom for a development scheme called Players Square, which involved 500 houses and apartments.

Bee Bee Developments Ireland Ltd and the Walls Group secured planning permission for the scheme in 2008, which has since expired. In 2010, the loans on the factory sites were transferred to Nama and the sites are now in the hands of receivers Grant Thornton.The sites, which have a combined area of 4.3 hectares, have remained idle.

To the north of these sites the council is redeveloping St Teresa’s Gardens, a dilapidated 1950s estate of 346 flats on six hectares, facing onto Donore Avenue.

The council has already demolished half of the old flats and expects the lands will eventually accommodate 540 new social, affordable and private homes. Construction of the first 50 of these homes, 34 houses and 16 apartments to be used for social housing, is expected to start later this year.

Rather than have the sites developed as standalone communities, the council has drafted an overall masterplan to ensure the area becomes a “vibrant mixed-use urban quarter” which will see the physical, social and economic integration of the land.

In addition to housing, almost all of which will be apartments, the Strategic Regeneration and Development Area (SDRA) will have a network of new streets and public open spaces, including parks, sports fields and children’s playgrounds, which will be available to the wider community.

Most of the homes will be built in blocks from two to eight storeys, but two apartment blocks up to 50m tall could be built towards the centre of the site. More than 20 per cent of the area will be devoted to public open space, including a 130m by 80m multi-sport playing pitch.

However, a number of councillors have criticised the siting of the pitch on lands currently occupied by recently refurbished flats, which were renovated at a cost of €50,000-€80,000 per flat to accommodate 50 families and individuals, who had been living in the now-demolished flats.

The council has said the pitch, which is surrounding by a park taking up 2.28 hectares, would not fit in any other location on the site.

The council said it expects planning applications for the Players Wills/Bailey Gibson lands to be made to An Bord Pleanála in the coming months.