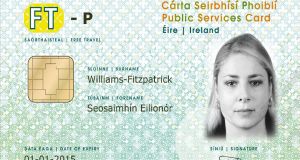 Sample Public Services Card: Minister for Public Expenditure and Reform Paschal Donohoe confirmed that all passport applicants will be required to have the document from the autumn

Privacy campaigners have expressed concern that a plan by the Government to make all citizens applying for a passport and a driving licence first obtain a State-issued public services card represents the introduction of a “national ID card by stealth”.

Minister for Public Expenditure and Reform Paschal Donohoe confirmed that all passport applicants will be required to have a Public Services Card (PSC) from the autumn, although he insisted it “is not and will not be” compulsory for citizens to get the card.

The Road Safety Authority confirmed that all applicants for driving licences will be required to have the card from early next year.

TJ McIntyre, a UCD law lecturer and chairman of the civil liberties group Digital Rights Ireland, said he was concerned at the plans.

The card, rolled out as a pilot in 2011, has been issued to over 2.5 million Irish citizens – initially to those claiming welfare benefits. The database used to administer provision of the PSC draws on information from across government departments.

The Department of Social Protection says claimants who do not comply with the stringent registration process for issuing the card may have their payments, including child benefit or free travel, suspended.

Some of the cards have been issued by post, without a face-to-face registration process. The Government says these cards used citizens’ passport photographs from the Department of Foreign Affairs, with their consent.

Mr Donohoe said the Government took its duties with regard to data protection “very seriously” and that all processing of citizens’ data under the projects had a legislative underpinning.

A draft scheme of a new Data Sharing and Governance Bill, which the Minister said he would like to have passed this year before a new EU regulation takes effect next May, comes before the Oireachtas Committee on Finance again on Tuesday.

Teen arrested over fatal hit-and-run in Co Tipperary 16:41
Mary Kenny no longer taking part in festival after questioning ‘draconian’ travel rules 16:20
Man arrested in relation to the death of a man in derelict Cork house 16:08
Court extends period of bankruptcy of farmer whose cattle were shot to 2024 15:45
Immunity to Covid-19 could be lost in months, study suggests 15:12

1 ‘I thought it was a hoax’: Patient dies after Texas Covid party
2 Maureen Dowd: Biden has his limitations but he’s no Trump
3 Quarantine process to be tightened as health officials grow nervous
4 White House turns its fire on Anthony Fauci over Covid-19 comments
5 Dirty money: How the Mafia plundered Italy’s public health system
Real news has value SUBSCRIBE