United States’ role is not to ‘lecture’ or ‘tell other people how to live’, says US president

President Donald Trump has called on Arab leaders to do their share to fight Islamist extremism during a speech made in Saudi Arabia before leaders of 55 Muslim majority countries, representing more than a billion people. Video: Reuters 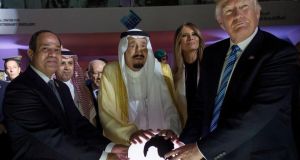 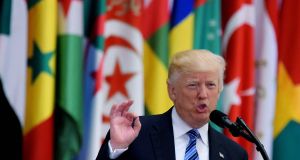 US president Donald Trump singled out Iran in a major speech on Islam yesterday, accusing the Shia country of fuelling the “fires of sectarian conflict and terror” in the Middle East.

Speaking a day after Iran re-elected the relatively moderate Hassan Rouhani as president, Mr Trump risked reigniting tensions with Tehran by accusing the country of bearing responsibility for instability in the region.

“From Lebanon to Iraq to Yemen, Iran funds, arms, and trains terrorists, militias, and other extremist groups that spread destruction and chaos across the region. For decades, Iran has fuelled the fires of sectarian conflict and terror,” Mr Trump said on his first speech on foreign soil since his election as president of the United States.

In a departure from his predecessor Barack Obama who negotiated a landmark nuclear deal with Iran, Mr Trump criticised the Iranian regime, accusing Tehran of offering a “safe harbor, financial backing, and the social standing needed” for terrorists. In particular, he criticized its role in the Syrian war where Iran is backing Syrian president Bashar al-Assad.

“Until the Iranian regime is willing to be a partner for peace, all nations of conscience must work together to isolate Iran, deny it funding for terrorism, and pray for the day when the Iranian people have the just and righteous government they deserve,” he said in a speech to the Arab Islamic American Summit.

While his message is likely to be welcomed by both Riyadh and Tel Aviv, where he arrives on Monday, Mr Trump has so far failed to follow through on his promise to renegotiate the 2015 Iran nuclear agreement.

Following a tumultuous ten-days for the president where he faced calls for impeachment from some democrats for sharing classified information with Russia and a deepening crisis over his relationship with former FBI director James Comey, Mr Trump’s team has been keen to cast Mr Trump as a credible global leader as he prepares to make a series of visits to potentially politically charged regions such as Israel, the Vatican and Brussels.

The Trump administration announced several multi-billion dollar arms and investment deal during the weekend visit to Saudi Arabia, though faced criticism of ignoring human rights abuses in the Gulf state.

In his speech to 55 leaders of Muslim countries, Mr Trump described the challenge of terrorism as “a battle between good and evil”.

“This is not a battle between different faiths, different sects, or different civilizations.

“This is a battle between barbaric criminals who seek to obliterate human life, and decent people of all religions who seek to protect it.”

But he warned Middle Eastern nations that they “cannot wait for American power to crush” Islamic terrorism, stating that America’s role is not to “lecture” or “tell other people how to live, what to do, who to be, or how to worship.”