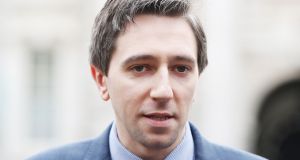 Minister for Health Simon Harris has asked the Attorney General to examine if exclusion zones can be enforced to ensure women are not intimidated by protestors when accessing services. File image: Niall Carson/PA Wire

The State may cover the cost for couples who choose to travel to the United Kingdom for a termination when they receive a diagnosis of a fatal foetal abnormality.

Minister for Health Simon Harris met with members of the group Terminations for Medical Reasons on Friday to discuss how such a system could be operated.

It is understood the Minister is keen to ensure women who choose to travel abroad after being informed the foetus will not survive outside the womb should not have to pay to travel.

However, the mechanisms of such a system have yet to be worked out. One of the possibilities is an examination of the treatment abroad scheme and whether it could be expanded to include such circumstances.

It is understood the advice from Department of Health officials is that this may not be permissible under that scheme.

The Minister informed the support group he was committed to finding a solution for those women as an interim solution before the main legislation to allow abortions in this country is enacted.

Mr Harris is understood to have committed to reporting back within two weeks with a potential solution to the matter.

The country voted overwhelmingly in favour of repealing the Eighth Amendment of the Constitution last weekend. If the decision is not challenged in the courts, Article 40.3.3 will officially be removed on Tuesday.

The Protection of Life During Pregnancy Act will remain the law of the land.

Legislation to regulate the termination of pregnancy will be considered by Cabinet on July 10th and introduced to the Dáil on July 11th.

In the meantime, Mr Harris has asked Attorney General Séamus Woulfe to examine if the Information Act 1995 can be lifted to allow doctors in Ireland refer women to abortion clinics abroad and to consult with doctors in other jurisdictions about their medical status.

The Minister is also understood to have requested Mr Woulfe to examine if exclusion zones can be enforced to ensure women are not intimidated by protestors when accessing services.

Speaking on Friday, Taoiseach Leo Varadkar said he wanted the legislation to be passed by the Oireachtas by the end of the year.

Mr Varadkar said it now fell to the Government and the Oireachtas to give the effect to the decision of the Irish people.

That involved the development of clinical guidelines for medical practitioners and the regulation of the abortion pill in Ireland, the Taoiseach added.

As part of the preparations, the Government is considering covering the cost of care for women seeking a termination of their pregnancy.

The Minister is assessing if the services provided under the Maternity and Infant Scheme can be expanded to women who may require an abortion.

Currently, that programme allows for maternity services free of charge when provided by a family doctor and a hospital obstetrician.

Government sources insisted the assessment was at the preliminary stage but it was keen there would be “no barrier to accessing services on the basis of affordability”.

Any such service will be subject to discussions with the GP representatives.