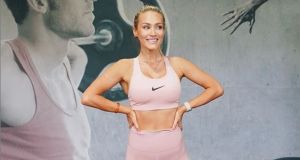 Fitness blogger Maeve Madden has begun live streaming her high-intensity workouts from her livingroom, which start at 6.30am

Aoife Cronin was having a bad week.

In New York, where she had moved to just over a year ago, the bars and restaurants were closing down and, worst of all, so was the gym. It was there that she went when she needed to take her mind off her job, recruiting staff for pharmaceutical companies, many now working to develop Covid-19 vaccines.

“I’m on a visa,” Cronin says. “If I leave I can’t come back for the indefinite because of the ban on entry.”

Her plan to return home to Cork was cancelled, which meant that she wouldn’t be able to see her best friends, Orla Dineen and Aoife Barry-Murphy.

So, they decided: if they couldn’t get together, they’d sweat together.

Cronin awoke before dawn, prepped herself and got on to a call with her friends. They were there to psyche each other up for fitness blogger Maeve Madden’s do-it-at-home, high-intensity, live-streamed-on-Instagram workout programme, starting 6.30 am, New York time. “It was brilliant!”

“The fact that the three of us are doing it together it’s almost like being in a class,” Dineen says. “You’re staying at the same pace as they are. You don’t want to be on the phone call after being like ‘Ah no, I gave up after 10 minutes. I don’t know what happened.’”

“When we all rang each other immediately after the class,” Cronin says, “we were just buzzing with excitement”.

Barry-Murphy says that Madden’s down-to-earth attitude is part of why the friends chose her class to keep them connected. “When she was stretching this morning she was like, ‘Look, I’ve got rolls too, we all have them.’”

Madden says that views and new followers on her Instagram account have surged since the shutdown. Hundreds join in to watch her daily, live fitness classes.

Originally from Newry, Madden is holed up in a London apartment, having had to cancel a series of bootcamp classes. “It’s difficult. I sit in my sittingroom, I walk two meters, and then I’m in my bedroom. I don’t have a garden, I don’t have any outside space, I don’t have a balcony,” Madden says.

After deciding to forgo her apartment’s gym when she saw people ignore its new, more stringent, hygiene guidelines, Madden began live streaming her workouts to help keep her followers, and herself, mentally and physically well. “If you’re stuck at home, why not?” she asks. “Everybody has done these massive grocery shops and you’re sitting at home, so you constantly graze. You have to have the motivation to clear some space in your livingroom. You won’t have the air conditioning that you do in the gym. But there’s only so much Netflix you can watch.”

Madden says her cardio-heavy workouts are aimed towards those who might not go to the gym anyway or, when they do, rarely use barbells and weight machines. “It’s a workout that goes in time with girly music. We got Britney. And J-Lo. Shakira’s on there. We’re clapping and jumping around the place. I thought that maybe I was going to make an eejit of myself, hopping around my livingroom, but it’s been great. It’s also something that kids can join in on.”

Maeve Madden’s recommended home workout equipment:
Dumbbells – they’re cheap and versatile.
If you have a space to use it, a skipping rope. If not, forget it.

If all that jumping might get your downstairs neighbours bent out of shape, yoga might be a better way to unwind.

“Yoga gives you a chance to tune in with yourself,” instructor Fabiana Mizzoni says.

After the three yoga studios where she taught shut their doors, Mizzoni began broadcasting classes from her home in Dublin city centre, having to prepare for each lesson by kicking out her wife and housemate from the room.

To do yoga, you don’t need a mat. You just need a space big enough to lie down on and a surface that grips. An awareness of where the ceiling lights are also helps. “If you’re at home, you’re not worrying about anyone else looking at you. If you fall over, no one’s going to know,” Mizzoni says.

Mizzoni recommends that beginners read up on the type of class they start off with, anything with the words slow or Hatha in the title should be okay. “Yoga is like dance, there’s such variance,” Fabiana Mizzoni says. “From very, very strong and fast and sweaty, to much slower and meditative and relaxed styles. Vinyasa is the most popular practice in the West, but it’s often quite fast moving.”

Fabiana Mizzoni’s recommended home workout equipment:
Aside from a yoga mat (obviously), an eye pillow to block out light and relax the facial muscles, which she says is good for people who look at screens a lot.

No one knows how the coronavirus crisis will end, but if Hollywood has taught us anything, right now an Arnold Schwarzenegger-type is doing push-ups in preparation to punch the virus into submission. If the gyms were open, he’d probably be doing deadlifts instead.

“We’re used to mechanical overload,” Colin O’Reilly, a big, beardy Flyefit trainer says, “causing damage to the muscle fibres by increasing the weight we lift. Unfortunately, the books that we can pile into a bag can only get so heavy. So, instead, we have to focus on the other ways to build muscle.”

There are a number of exercise programmes geared toward getting buff at home. Most are filled with exotic twists on classic exercises like handstand push-ups and one-footed squats. Many are prison-themed. One was developed in solitary confinement by the criminal Charles Bronson.

O’Reilly recommends that home exercisers focus on muscular tension by, say, slowing down as you descend on a push-up and holding the position at the bottom, or metabolic damage, where you increase the reps of an exercise to flood the muscle with lactic acid and nutrients.

“You mightn’t make gains, but you’ll definitely maintain what you have,” O’Reilly says. “It’s easier than you think. Strength is a neurological adaptation to the weight, unlike cardio, which falls off pretty quickly.”

Colin also recommends taking the opportunity away from the gym to work on recovery, sleep, mobility, and nutrition. “It’s an opportunity. People are used to training a certain way, and here’s a time to get some fresh stimulus.

“We’re all coming toward the summer, it might have been time to cut down anyway.”

Colin O’Reilly’s recommended equipment:
A resistance band, both for working on your mobility and for adding extra tension to bodyweight exercises.
A kettlebell can do both resistance training and metabolic work.

The HSE says that, unless you’re self-isolating, you can still go outside for walks, runs or cycles. But, if you are stuck indoors, it’s never been easier to find a way to workout at home.

You may as well, you’re wearing your gym clothes anyway.