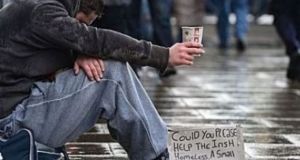 More than 650 apartments, hotel rooms and single-occupancy rooms have been sourced across Dublin for homeless people, and all emergency accommodation will stay open 24 hours a day during the coronavirus outbreak.

Vulnerable homeless people – including those who are older or have underlying health conditions – are being moved to “separate cocooning facilities”.

The measures are outlined in a letter to councillors from Eileen Gleeson, director of the Dublin Region Homeless Executive (DRHE), and deputy chief executive Brendan Gleeson.

The steps come amid “unprecedented demand on services for homeless families and individuals . . . over recent weeks”, they said.

The measure will be welcomed by many homeless people who in recent weeks have complained of having to leave their accommodation during the day, with one diabetic man choosing to self-isolate in his car as he feared for his health in shared hostel accommodation.

In the past fortnight, the DRHE has sourced 160 self-contained apartments, 197 ensuite bedrooms in hotels, and 300 adult single-occupancy beds

“The opportunity to source such accommodation is an indication of the very significant change that has occurred in the private property market as a result of Covid- 19,” it said. “We will continue to source as much alternative accommodation as possible in the days and weeks ahead.

“This additional accommodation for single persons will allow us to reduce the concentration of individuals (sharing) in our existing hostels, that will allow them to provide improved safe distancing options.

“Indeed, the process of moving our residents has already begun, with numbers residing in shared emergency accommodation reducing on a daily basis,” the letter said.

All one-night-only accommodation, where residents would be expected to leave during the day, have been converted to 24-hour services, with meals provided on site.

“Hotel living is proving to be a challenge for service users and we are working with the hotel operators to extend meal times in the hotels and are actively looking at other options.”

Outreach teams provided by Dublin Simon and the Peter McVerry Trust are engaging with people sleeping rough, and the medical service for homeless people Safetynet is testing at-risk homeless people for Covid-19 in hostels.

Cllr Daithí Doolan Sinn Féin spokesman on housing in Dublin, welcomed the measures but raised concerns about people being released from prison into homelessness during the crisis.

“Also, families are under terrible strain attempting to home school children in hotel rooms and family hubs. [The] Department of Education must put extra supports in place for these children.”

The most recent figures from the Department of Housing show there were 10,271 people in emergency accommodation during the week of January 20th to 26th. Of these 3,574 were children, 2,297 were their parents or guardians and 4,400 were adults without dependents.