Claims rise in all 50 states as pandemic continues 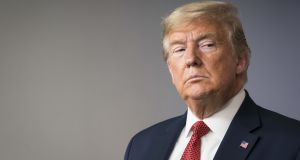 US president Donald Trump. The sudden stop of the US economy has several economists predicting gross domestic product will shrink in the second quarter by the most in quarterly records dating back to 1947. Photograph: Bloomberg

The number of Americans filing for unemployment benefits surged to a record 3.28 million last week as businesses shuttered and laid off workers as part of efforts to slow the spread of coronavirus.

In the biggest insight yet into the economic toll the pandemic is already inflicting, initial jobless claims in the week ended March 21st surged from 282,000 in the prior week and more than quadruple the previous record high of 695,000 in 1982, according to Labor Department figures released Thursday. The statistics date back to 1967.

Economists’ projections for the figure ranged as high as 4.4 million.

“This shows the severity of the downturn, and the speed of it,” said Michelle Meyer, head of US economics at Bank of America. “It speaks to the unusual nature of this recession – it is an abrupt plunge into recession versus prior downturns, where the shock has time to multiply. We could have very high numbers continue for the next few weeks.”

Claims increased in all 50 states and the District of Columbia, with nine states reporting increases of at least 100,000 from the prior week.

Pennsylvania reported the biggest number of claims with 378,900, while California claims rose by 129,200 to 186,800. The figures have not been adjusted for seasonal fluctuations.

US lawmakers are aiming to boost benefits for those laid off. As part of a $2 trillion stimulus package waiting to be approved by the House of Representatives, unemployment insurance would be extended and expanded.

The sharp rise in claims signals the unemployment rate could rise several percentage points in coming months, after matching a 50-year low of 3.5 per cent in February, which reflected 5.8 million unemployed Americans.

The sudden stop of the nation’s economy, paired with a consumer retrenchment, have several economists predicting gross domestic product will shrink in the second quarter by the most in quarterly records dating back to 1947. – Bloomberg