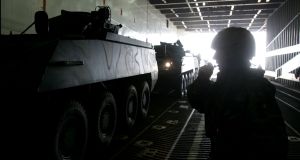 Increased take-home pay for members of the Defence Forces is likely to be recommended by the Public Service Pay Commission when it reports to the Minister for Finance Paschal Donohoe today.

The commission, an independent body tasked by the Government with examining pay in the public sector, is expected to make its report on Defence Forces pay and the challenges of recruitment and retention of staff in the armed forces available to Mr Donohoe today.

It is likely that the report will be brought to Cabinet next week with a recommendation that the pay increases be approved. These are in addition to basic pay, it is understood.

Sources say the commission was likely to propose increases in military service allowances for personnel in the Army and to patrol duty allowances for members of the Naval Service.

In addition, the commission is understood to have been looking closely at the reintroduction of a loyalty bonus for pilots in the Air Corps to persuade them to remain in military service. Many pilots have left the Air Corps to work for commercial airlines, leading to personnel shortages.

A similar “service commitment scheme” for pilots which saw some personnel receive additional payments of up to €22,000 per year on top of salary was withdrawn a number of years ago.

While official sources were tight-lipped last night, it is expected that the patrol duty allowance, currently payable at €48 per day to naval personnel at sea, would be increased to the levels paid before the financial crisis when they stood at about €53 to €55 per day depending on rank.

The military service allowance, which currently ranges from €42-€123 per week, is also set to be increased.

The pay increases for military personnel come after a campaign by families and relatives of Defence Forces personnel, and have been supported by Opposition parties in the Dáil.

Numbers in the Defence Forces have continued to fall despite recent recruitment campaigns. The full strength of the Army, Naval Service and Air Corps combined should be a minimum of 9,500 personnel but has now fallen below 8,500; the lowest point since numbers were increased in the 1970s in response to the Troubles erupting.

The increases also come after a pay deal with nurses and signals from Ministers at union conferences over the Easter period that the Government was willing to consider requests for specific concessions on pay and pensions.

Minister for Health Simon Harris told doctors he would look at a new process to end the two-tier pay system, a move estimated to cost the exchequer €40 million.

Minister for Education Joe McHugh told teachers that remaining issues on recent-entrant pay would be given “full consideration” either as part of a new pay review in the public service or in talks on a successor to the existing overall public-service pay agreement.

The softening of the Government’s position on public-sector pay has also been signalled to the general public-service unions such as Fórsa, the largest union representing public servants, which recently said it would seek the restoration of a shorter working week.

Unions are also pushing for a midterm review of the public-sector pay agreement later this year, which could open the door to further pay concessions.

Meanwhile, Government sources have played down expectations that workers on community employment (CE) schemes will be granted access to public-sector pensions.

Workers on CE schemes postponed over the weekend a strike due to begin yesterday following an assurance from the Department of Social Protection that senior officials would embark on a series of talks to address CE supervisors’ grievances. Chief among their demands was that they should be granted pensions on the terms available in the public sector.

The Government has said they are employees of private-sector companies and ineligible for a benefit that would cost the exchequer hundreds of millions of euro.

The Government forecast last year that granting pensions to 1,250 CE scheme supervisors could cost the State more than €500 million, because it would trigger knock-on claims across the community and voluntary sector.